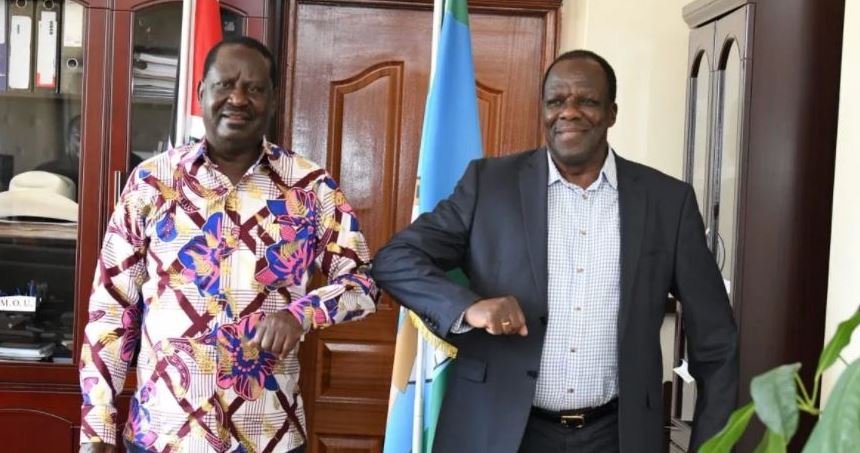 Speaking for the first time since the August 9 General-Election, Oparanya said he will not back the ODM party boss in the future.

“I am offering myself from now to lead the unity drive of our people. I am done with Raila and even if he bad-mouthes me, God forbid, he knows, he will not be forgiven,” Oparanya said.

Oparanya, who led the Azimio presidential campaigns in Western Kenya, decried that the region’s support for Raila Odinga in five successive elections had not been reciprocated.

He particularly took issue with the Luhya community missing out on the East Africa Legislative Assembly (EALA) slots.

“I was pushing for Justus Kizito (former MP Shinyalu) to go to EALA, but MPs were grumbling that Kizito had no money. So I was wondering that MPs must also be bribed to vote,” he said.

“The result of that vote is that all other big tribes but the Luhya sent an MP to EALA,” Oparanya added.

This comes a day after a section of ODM MPs from Kakamega indicated they are charting a new political direction.

The MPs said they were planning town hall meetings in the county to explain to residents why it was important for all elected leaders to embrace Ruto’s administration so that the region is not left out in the cold.

“The election period is over and I want to meet President Ruto and work with him to ensure the people of Kakamega County are not left in the cold as the new administration settles down to work,” Khamala said.

Navakholo MP Wangwe added: “Kenya has only one President (William Ruto). If we don’t move close to him, we will continue waiting [in the] queue for our turn as other communities have their share of the cake from the government.

“We want to make it clear that we have been sent by those who elected us to talk to the President and work with him.”

They however maintained that they are not planning to defect from ODM.

“We do not want to be leaders who articulate our issues at funerals because we have decided to stick in the opposition. We want to meet President Ruto anytime and discuss with him our development agenda,” Shinali said.

Lone Gunman Kills Man In Front of His Family in Kirinyaga < Previous
Manhunt Launched After Drunk Man Is Sodomised In Bomet Next >
Recommended stories you may like: