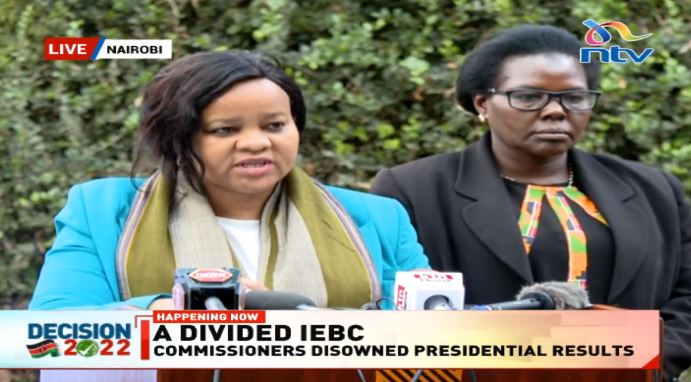 The 4 IEBC commissioners who disputed the election results have this afternoon addressed the media. This is following their Monday press conference, where they disowned the results announced by Chairman Wafula Chebukati.

The commissioners refused to take questions on Monday, promising to instead convene another presser to explain their reasons.

Their biggest issue appeared to be an arithmetic error by IEBC, where the total percentages by candidates amounted to 100.01%, rather than the expected 100%.

It is completely possible when rounding off is considered, to indeed exceed the 100% mark, but it can also easily be a typo.

However, that was not the most shocking part. Vice Chair Cherera said that the 0.01% as equivalent to over 140,000 votes, which could be enough to tilt the election. “The 0.01% translates to approximately 142,000 votes, which would make a significant difference in the final results. We therefore decline to take ownership of the results,” Cherera said.

Only problem here is that that mathematics is completely fabricated. 0.01% of 14,000,000 valid votes is only 1400 votes, not even close enough to change the outcome.

Juliana Cherera: The aggregation of the percentages of the results scored by the 4 presidential candidates exceeded the 100% mark, the 0.01% translates to 142,000 votes which made a significant difference in the final presidential results. #KenyaElections2022 pic.twitter.com/OKLTaiKc4a

Here is a perfect analogy of how IEBC arrived at a figure higher than 100%. 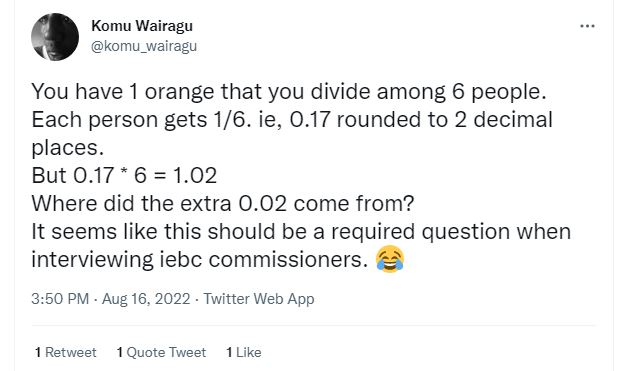 Cherera also admitted that the tallying was done by IEBC technical staff, with the commission only receiving the aggregated data.

Raila Odinga Rejects Presidential Election Results < Previous
Follow These Tips For Best Security of Bitcoin Wallet! Next >
Recommended stories you may like: