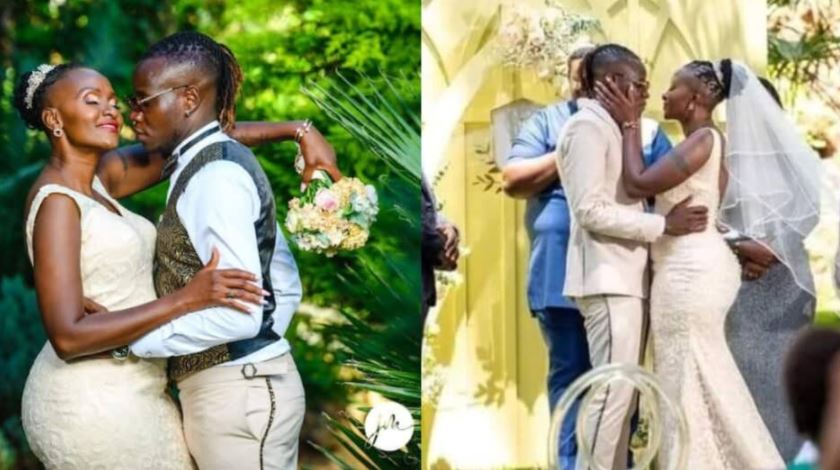 On January 4, 2022, celebrity gospel musician Guardian Angel said ‘I Do’ to the love of his life Esther Musila at Bliss garden in Thome Estate.

The private and intimate wedding ceremony effectively shut down the couple’s critics who never miss a chance to mock their age difference. Guardian Angel is 33 while Musila is 51.

The wedding was attended by close friends and family, including Musila’s three children. However, one special person who was conspicuously missing was Guardian Angel’s mother.

Some observers have been speculating that she did not attend the wedding because she does not approve of her son’s relationship with the international civil servant.

While the singer would have been better placed to explain why his mother was a no-show, it was Esther Musila who faced this question in an interactive session with her followers on Instagram.

“She lives in Canada,” Musila said.

Another fan asked why her eldest son allegedly missed the wedding, to which Esther responded: “Who told you he did not attend?”

Indeed, it was Musila’s firstborn son who walked her down the aisle.

Musila also faced a question about having kids with Guardian Angel.

“Have you thought of having a child with Guardian?” a curious fan asked.

Musila responded: “I don’t have to think.”

Why YouTube Couple Rama, Shiko Nguru Took Down Channel with 14 Million Views < Previous
What Carrol Sonie Wants From Mulamwah After He Claimed She Attempted Abortion Next >
Recommended stories you may like: