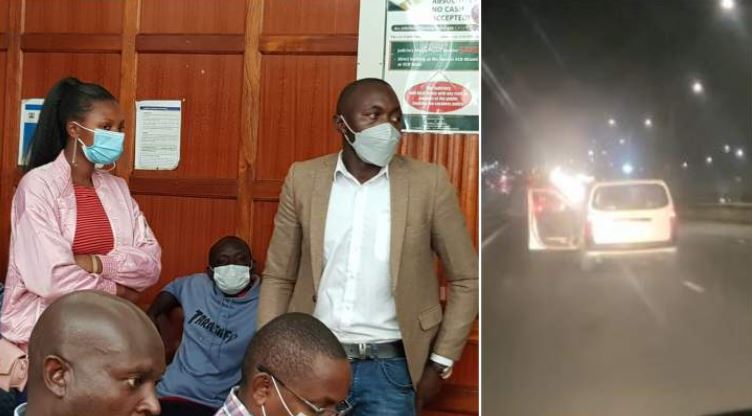 The driver of a Toyota Probox that was filmed with a screaming passenger along Thika Superhighway has been charged in court.

A video of the gut-wrenching incident was shared online on Sunday. It showed a female passenger screaming to be let out of the speeding Probox(registration number KBJ 835Z) with the passenger door open.

The incident was initially thought to be a kidnapping before the vehicle was traced to a company located on Mombasa Road and the driver arrested.

Police established that the driver and his passenger were lovers, and had disagreed after the man insisted they head to his place against his girlfriend’s wishes.

The driver had picked up the woman at Kenyatta University and was reported to be heading towards Ruiru.

Following the arrest, the driver identified as James Maina Kibe was arraigned at Milimani Law Courts in Nairobi on Monday.

He was accompanied by his girlfriend Karen Wanjiru who is a student at Kenyatta University.

The 26-year-old businessman was charged with one count of reckless driving contrary to section 47 of the traffic act cap 403.

“You are charged that on March 19, 2022, at about 2300hrs along Thika Super Highway within Nairobi County, being the driver of a motor vehicle registration number KBJ 835Z make Toyota Probox did drive the said motor vehicle on the said road in a manner which was dangerous to the public and other road users, ” the charge sheet read in part.

In mitigation, James Maina said they had a slight misunderstanding and asked for forgiveness.

“Your honour she is my girlfriend and she is here in court. I pray for forgiveness,” James said.

Senior Principal Magistrate Esther Kimilu suspended his driving license and fined the driver Sh70,000 or serve one year in prison.

In her ruling, the magistrate said she considered the fact that the driver endangered other road users though there was no accident caused.

Here’s the video of the incident.

World Happiness Report 2022: Kenya Ranks 119th In The World < Previous
Casinobonus.rs – site for online casinos, casino bonuses and games Next >
Recommended stories you may like: