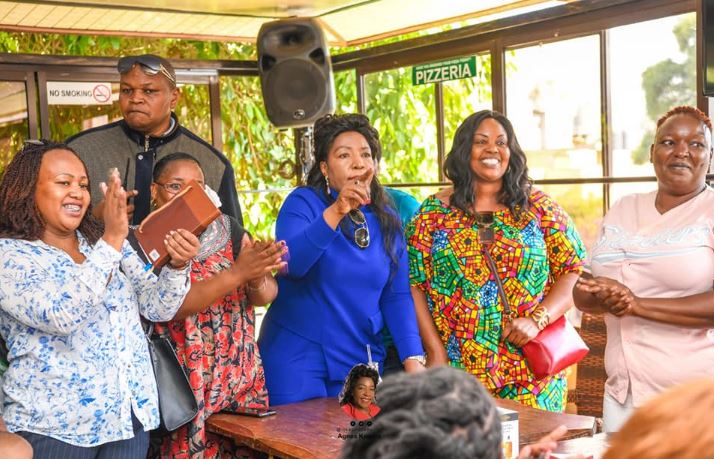 A group allied to Nairobi gubernatorial hopeful Agnes Kagure has spoken out against politics of insults, particularly targeting women and the media.

Earlier this week, Ombori Monari, the leader of the Abagusii community in the U.S who goes by the alias Cosmo Choy, launched a verbal attack aimed at President Uhuru Kenyatta’s mother, Mama Ngina Kenyatta.

This was after the country’s first first lady publicly backed her son’s decision to support ODM leader Raila Odinga.

Choy, who is a staunch supporter of Deputy President William Ruto, made many unprintable remarks, only to later ask for forgiveness.

“I am here to apologize to the Kenyatta Family, Mama Ngina Kenyatta and President Uhuru Kenyatta. I am sorry for the remarks that I made a few days ago. I didn’t mean it. Mama aliingia siasa na akaongea juu ya Ruto na mnajua napenda Ruto lakini siasa ni mbaya,” he said in a Facebook post.

“I do apologise. Pole sana kwa familia, pole sana mama we ni mama wetu. It is something sweet to have a mum alive, I lost my mom and I will never see her again so pole sana.  We are human beings and we make mistakes and we forgive each other.”

Another incident that caught the attention of the nation was an attack on journalists at ODM headquarters on Thursday. Two journalists, Moses Nyamori from The Standard and Mr Luke Awich from The Star, were assaulted by security officers at Orange House, triggering an uproar on social media.

Despite the two identifying themselves as journalists, the security team ordered them to leave, roughing them up and tearing their clothes in the process. Media Council of Kenya condemned the incident, demanding action be taken against the attackers.

According to MCK, the two journalists were singled out following recent unfavorable stories that they wrote.

“The Media Council of Kenya calls on the ODM leadership led by its leader Raila Odinga who was hosting today’s event to disown such acts of violence against the media and commit to non-interference in the work of media workers in all its activities henceforth,” said MCK CEO David Omwoyo.

ODM would later apologize through its Secretary for Political Affairs Opiyo Wandayi.

The Kagure-allied group noted that there is no room in Kenya for either verbal or physical assault during this campaign season.

Commenting on the issue, Kagure noted, “We stand firmly for the dignity and respect of women, we also stand strong with journalists as they go about their duties, and we strongly advocate for sobriety during and after this election. Kenya ni yetu, tuheshimu wote na tupendane. Sawa sawa?”

Here’s a news report on that.

Lawrence Warunge: Familicide Suspect Threatened to Kill Remaining Kin – Court Told < Previous
Mama Rachel: Ruto Will Keep Donating Until He Has Nothing Next >
Recommended stories you may like: