Watch: Eric Omondi Issues Stern Warning to Traditional Media, ‘I Will End You. Try Me’ 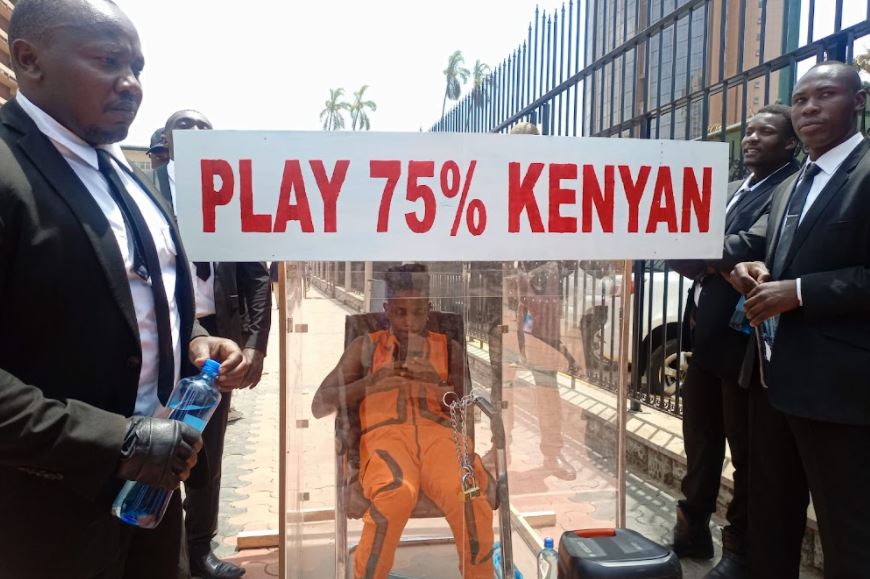 On Wednesday, the comedian caused quite the spectacle after he pitched camp outside Parliament in a locked glass cage. Omondi announced he was on a hunger strike until Members of Parliament passed his Bill on 75% airplay.

In a subsequent post, Eric Omondi issued a stern warning to media houses to comply with the Bill once it is passed.

“Bill ikishapitishwa ivi, all the media houses in Kenya try me! You’re already dying! Traditional media is on its deathbed if not dead. Nobody is watching you, you need us.

“Once this Bill passes, try me! I will make sure Citizen TV, NTV, AND KTN are closed down,” said the comedian.

A bullish Omondi warned that everything he says usually comes to fruition. He gave an example of his run-in with former KFCB Boss Ezekiel Mutua, who used to criticize him before he was sacked unceremoniously.

“I’m giving a warning to the traditional media…you are weak, sickly and dying because we live in a digital country. Start playing 75% local content now. Don’t wait until the Bill is passed. Use common sense! Don’t be stupid!” Omondi barked.

Janet Mbugua’s Reassuring Advice on Healing < Previous
Ruto has Failed as Deputy President, Should Review his Habits says Governor Mutua Next >
Recommended stories you may like: