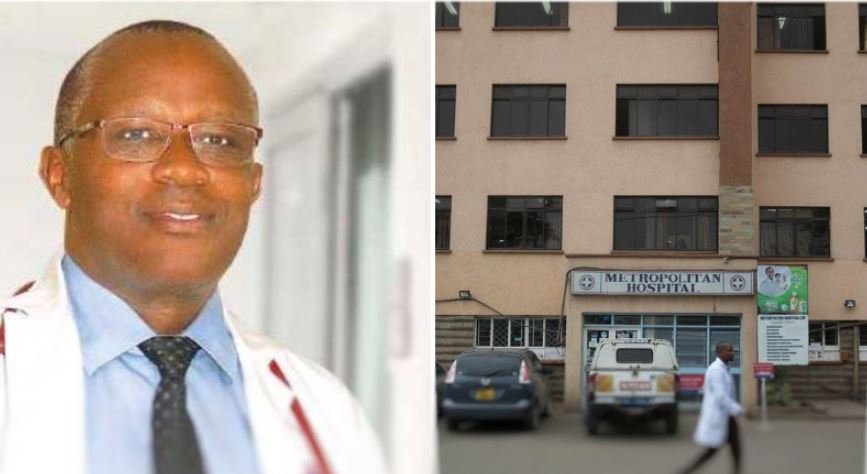 Dr. Kanyenje Gakombe is the founder and CEO of Metropolitan Hospital in Eastlands, Nairobi.

Before finding success in the healthcare sector, Dr Gakombe traded stocks and run several businesses, including a matatu venture that failed.

He speaks about his career journey and more.

Why did you opt to have the hospital located in Nairobi’s Eastlands?

We used to tell each other that we will build a hospital, something in between Kenyatta National Hospital and Nairobi Hospital in terms of quality and cost. Metropolitan Hospital was built to look after the middle class then, because our clients were not the ones who could afford to go out of the country for treatment or to high-end private hospitals. They could afford something other than public hospitals but were forced to go to public hospitals.

You pride yourself in having a paperless hospital…

All our systems are integrated. We discovered that there was a need because in our first years, our turnover was increasing as was the patient numbers but we were making losses and they were getting worse. The accountants told me it was the system. IT for me would be like a dashboard that showed me everything so that I was not only in charge but in control. There was no point being a leaking sieve.

Looking at all these, you seem to have had this medical journey figured out.

I had never met a doctor though I had seen people working in hospitals and a lot of what they did was not attractive, it caused a lot of pain to us. I was a good student in English, I liked Shakespeare, so I thought writing would do for me. Law was my second choice but medicine became of interest in high school because I was good in biology. In Mang’u, where I was for my ‘O’ and ‘A’ levels, if you were a top student in biology, you pursued medicine.

Where and when did the business bug bite you?

Growing up, I was interested in trade. In Murang’a where I was born, I kept chicken and goats, which I was already trading in, though they were stolen when I went to Form One. I joined the scouts in high school where I attempted to grow beans for sale to support the scout movement. In ‘A’ Level, I was the bread vendor and on campus, I was trading in stocks at the Nairobi Stock Exchange (now the Nairobi Securities Exchange), renting out construction equipment and trying to run a matatu business, which failed.

At every stage you had a business idea to do and implement.

Entrepreneurship is about solving a problem, and that is what I set out to do, but part of my drive was to find alternative income also was because my parents could not provide me with the kind of life that I wanted. I was also aware that my dad would retire before everyone went to school and so from around Standard Six, I figured out that I had a job to do to educate my siblings. By ‘A’ Level, I was paying my school fees, on campus, I was educating my siblings. In my fourth year of medical school, I got married!

This was a life-changing moment for you and your wife?

I had a responsibility now to raise a child and take care of my wife who was a Vet student then and did not have a job. Our son, who is now 30 years old, has autism and we have to plan how he will have care even beyond our lives. Part of the things that engage my mind is how to make this country better because not everybody is able to fend for themselves, including him. We need a system that can take care of people like Martin (his eldest son).

How is it raising a child with special needs?

The first thing is reconciling whose genes didn’t work because if you don’t come to terms with that and move past the blame games, you will end up separating as parents. As a couple, you have to make a decision to keep out the noise from relatives from either side blaming you or your partner. The second bit is having the resources – money and time – to take care of the child’s special needs because they cannot use public transport and public schools, for example.

Your son is now 30, are we getting better as a country and society in taking care of people who are most vulnerable?

I think it is getting easier, first because the media – mainstream and social – have shown a lot of interest in autism compared to when we started. It is also possible for people to publish their own stories and get a global picture, including getting support organisations. The digital environment has allowed parents to get help and solutions, things that were not available to us when we started off because we needed hard copies of any reading material.

Has the government done enough to support persons living with disability?

You are the sixth born in your family but the first of your siblings to go to university. Why?

I used to ask myself why we were not doing well in school. I knew people who go to university – from my neighbour’s children and my mum’s cousins. One of them ended up as chair of the Stock Exchange, which I took interest in and eventually got hired by a stock brokerage firm that trained me as a broker. At least, there was somebody to show me the way. This somehow contributed to how we set up the hospital. Our first share offer for Metropolitan Hospital was not a jua kali one – we wrote a prospectus, hired consultants and convinced Deloitte to be our reporting accountants for the projections.

You were just young medics with a big dream, how did you manage to be that credible?

We looked for older people, which is why I advise young people that if you have a credibility gap, look for older people who believe in you and bring them on board. We knew that very few were going to believe that we were capable of looking after their money. We had credible, older doctors in our board, which had consultants and we, the vision bearers, who were my discussion group members from medical school.

What do you have to say about the younger generation which seems restless in trying to make money?

It takes 10 years for a company to be discovered, and it is not just business. By the time you are recognised as a professional usually there is a 10-year period of effort, work and gaining experience before the world discovers you. There are no get-rich-quick options, you have to put in effort.