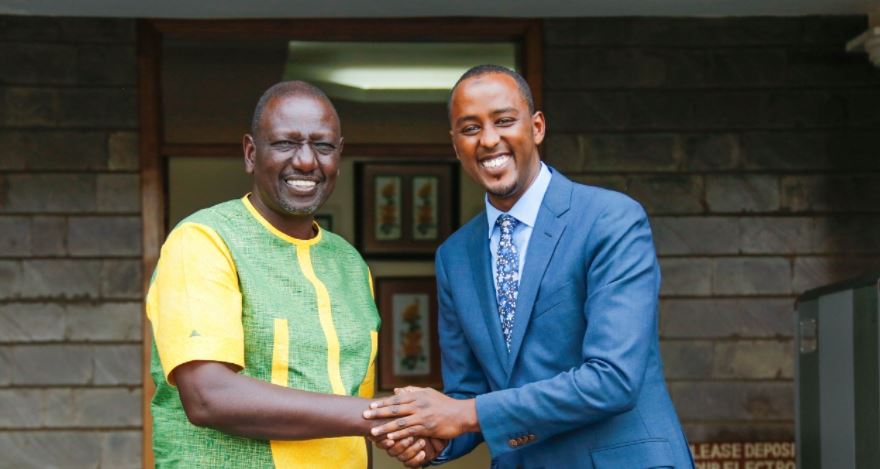 DP Ruto announced the appointment on Monday via social media.

“Renowned TV journalist has been appointed Head of Communications in the William Ruto Presidential Campaign. Welcome to the Hustler team,” DP Ruto said.

The DP officially welcomed Hussein to the ‘Hustlers’ Camp after a meeting at his official Karen residence.

Hussein mentioned he relates with the Hustler narrative and believes in the Bottom-Up economic blueprint.

“I share with the hustler story and so do majority of Kenyans. Nothing gives me more pleasure than being part of this team that is driving a paradigm shift in our politics and ultimately, GOVERNANCE! From Top-down to BOTTOM-UP!” he tweeted.

Hussein Mohamed left Citizen TV in October 2019. At the height of his 10-year career in media, Hussein was acclaimed as one of the most reputable journalists in Kenya.

He earned rare public praise for his hard-hitting interviews with the country’s political elite such as President Uhuru Kenyatta, DP Ruto and ODM leader Raila Odinga.

His interview with DP Ruto in particular is regarded as one of the best to ever happen on Kenyan television.

In fact, Raila once described him as one of the best interviewers.

After his resignation, Hussein Mohamed has been working as a communications consultant with USAID Kenya.

Here are some tweets reacting to Hussein’s appointment.

Join me in welcoming Hussein Mohammed to the winning team.

Your input as the Head of Communications in the William Ruto Presidential Campaign will be pivotal.

We are African and Africa is our Business.. pic.twitter.com/u1D6m0KYsw

Is this the same Hussein Mohammed who is now Head of Communications in the William Ruto Presidential Campaign? Seems like there is nothing impossible in the hands of a politicianpic.twitter.com/5dFC1SZVIz

Waah, si UDA is on a roll. Yesterday, Mudavadi came on board. Today it is Starehe MP Jaguar & Former #NewsNight Anchor on Citizen TV Hussein Mohammed. DP Ruto is gaining momentum even though he is ahead of the game. Is it possible for the Former PM Raila Odinga to catch up? 🤔

The way Hussein Mohammed used to go ham on Ruto…. I remember at some point in an interview wsr even asked him, “Is that what they sent you to ask me?”

Insinuating that the journalist was working with Raila.

I keep saying WSR is a good strategist. The appointment of Hussein Mohammed is a good move.

Hussein Mohammed would have been a great person if he Joined Raila and his Azimio la Uongo.

Hussein Mohammed is a huge signing for the hustlers. The mere fact he’s appointed Head of Communications in Ruto’s campaign should not diminish his revered status among Kenyans. Let’s not call my friend names. Let’s respect his decision. Hey @HusseinMohamedg, wishing you the best pic.twitter.com/xk4Pm2nMs9

From several interviews, Hussein Mohammed knew who Ruto is. He knows how corrupt his new boss William Ruto is. His choosing to work with Ruto, just like Mudavadi did does not absolve Ruto of anything. He’s still the face of corruption. pic.twitter.com/pCroO2m7TC

Hussein Mohammed has officially joined Hustler nation,chase that bag ,poverty is the enemy.

Hussein Mohammed a great choice for WSR Head of Communications for the presidential campaign team. Congratulations @HusseinMohamedg. You deserve it. In you DP Dr @WilliamsRuto is in safe hands pic.twitter.com/kicRBdh98R

I was right on Hussein Mohammed all along.

History has absolved me.

There is a huge debate here where I am seated as guys are comparing renowned journalist Hussein Mohammed with renowned journalist Larry Madowo. I haven’t joined the debate yet, but personally I would go with both of them because of the level of professionalism that they display.

Asante Your Excellency! I share with the hustler story and so do majority of Kenyans. Nothing gives me more pleasure than being part of this team that is driving a paradigm shift in our politics and ultimately, GOVERNANCE! From Top-down, to BOTTOM-UP! https://t.co/IL6EhFUs2n

Teacher Behind False Death Facebook Post Released on Bail < Previous
Why Bolt is Spoiling Kenyans With Crazy Food Discounts, and How They are Paying for It Next >
Recommended stories you may like: