Eric Omondi: Jacque Maribe’s Son May Not Be Mine. She Refused a DNA Test 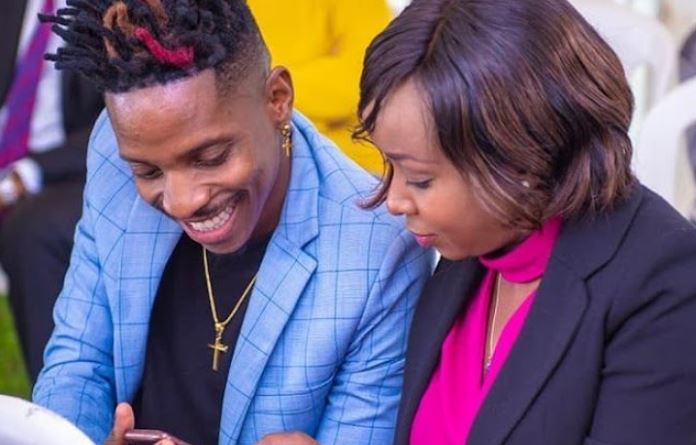 In the continuing saga between comedian Eric Omondi and journalist Jacque Maribe, the comedian has finally responded.

This week, Maribe accused Omondi of being a deadbeat father to their 7 year old son. She was replying to an Instagram page where Omondi posted a photo of himself and seemingly ‘pregnant’ Miss P.

In the post, Omondi promised to take responsibility. Maribe replied with amazement, wondering how that could happen when he had not taken responsibility of their child.

Now, Omondi has come out to make a few things clear.

Apparently, there is no consensus in that relationship as to who the father of the child is. While Maribe says he belongs to Omondi, the comedian has his doubts. He wrote that the two only hooked up once, and used protection. Two months later he was informed that she was expecting, and despite his doubts, Maribe said that a mother always knows the father of her child.

After the boy was born, requests for a DNA test have been denied, and for that reason Omondi has not taken responsibility.

This is what he wrote.

It was really a one night thing because she was dating KTN’s Sam Ogina at the time. WE USED PROTECTION!!! After two Months Jacque tells me she’s Pregnant!!! I immediately ask her how since we used Protection???

She then tells me “It doesn’t matter the mother always knows who the Father is and that I am the Father!!! During the entire Pregnancy nothing happened and we barely saw each other. Roughly 4 months after the baby was born Jacque called me and asked me if I would help or be part of the baby’s life.

I asked her for a DNA test so that I could comfortably be part of the baby’s life and SUPPORT fully. She got very offended and Refused my request. For 7 seven years I have begged Jacque to allow us have a DNA Test and she has CONTINUALLY refused!!!

President Kenyatta: Kenya To Transition To Clean Energy By 2030 < Previous
Boniface Mwangi To Eric Omondi: “You Have Shamed Your Baby Mama and Son” Next >
Recommended stories you may like: