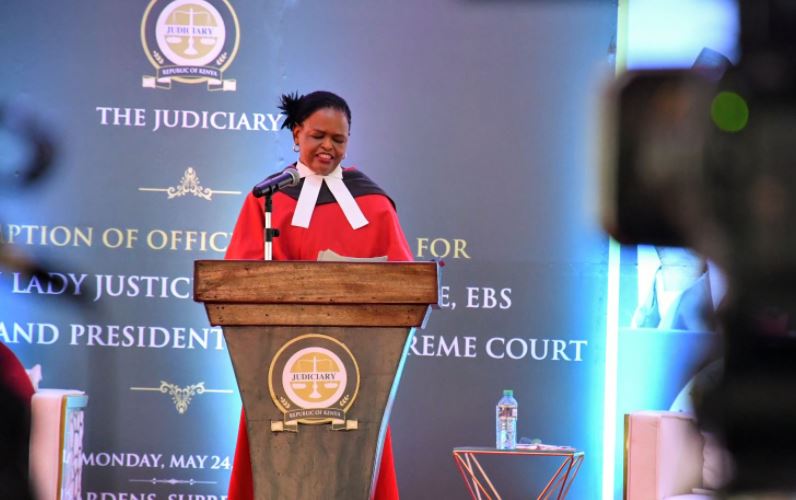 Chief Justice Martha Koome received instruments of power on Monday, officially assuming office as the head of the Judiciary.

In her speech, CJ Koome pledged to ensure cases are dispensed within three years of filing. She said this would be a continuation of retired CJ David Maraga’s tenure which focused on reducing case backlog and ensuring that all cases above 5 years in all courts were concluded.

“This is a target that is possible to achieve if we all embraced a case management system and the multi-door approaches that are now available to us such as the court users committees, court-annexed mediation, small claims court and alternative justice system,” she said.

At the same time, CJ Martha Koome said she will work towards driving forward the reforms started ten years ago by retired Chief Justice Willy Mutunga.

The CJ further pledged to work with LSK president Nelson Havi, who was opposed to her appointment because of an emergency ruling she handled in 2017 on the eve of the repeat presidential election.

CJ Koome additionally pledged to embrace the use of technology, as was occasioned by the COVID-19 pandemic, starting with the expansion of the electronic filing service as well as other ICT initiatives.

“A decade after promulgation it is imperative that we expedite some of the promises of the 2010 Constitution so that Kenyans can realize the benefits. As an institution that generates almost Kshs. 3 billion shillings annually, this revenue can be an important first step in addressing some of the challenges we currently face,” she noted.

“We will continue to build the case for additional funding and a sustainable budget for these investments and judiciary functions based on our track record and the needs of Kenyans. My role is to advocate for the resources to ensure that the structures needed are physically and representationally present at every court station so that every player can enjoy the fruits of this system.”

Koome also acknowledged the existence of corruption within the Judiciary saying there presently exist too many such cases pending in the courts.

“…even though there are some structures for curbing corruption, such as the establishment of the Office of Judiciary Ombudsman, we have not succeeded to effectively deal with these cases,” she stated.

“As noted by former Chief Justice Mutunga in 2016, when he stated that the Judiciary was under capture by agencies within government, the private sector and civil society. This continues to be an active threat to the independence of the judiciary.”

Maraga Advises CJ Martha Koome < Previous
The Trending Pics in Nairobi This Tuesday Next >
Recommended stories you may like: