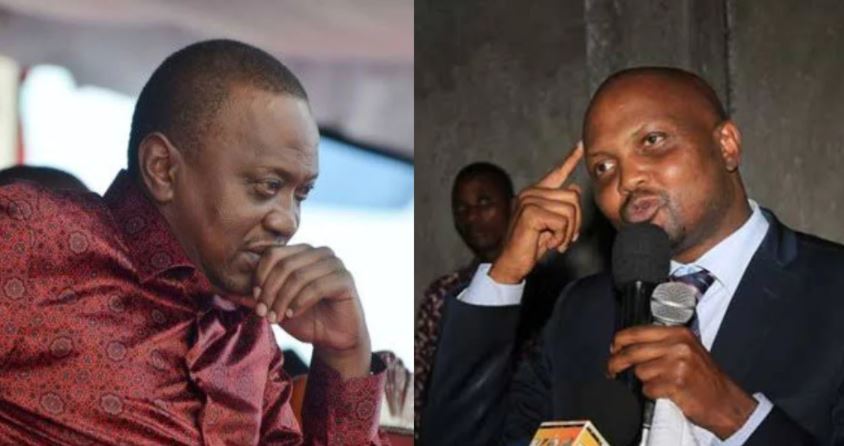 Gatundu South Member of Parliament (MP) Moses Kuria fell flat on his face Wednesday when he tried to prove he’s on speaking terms with Uhuru Kenyatta during a live interview.

The outspoken lawmaker had appeared on Trace Radio in the morning to give his views on a number of topics in the Kenyan political scene.

Among the topics was his involvement with the ‘Tanga Tanga’ faction associated with Deputy President William Ruto.

“I did not join Tanga Tanga, I created Tanga Tanga. The Tanga Tanga movement is strong in spirit. There’s a deep message within it which I can summarize as self determination,” Kuria said.

Maintaining that the ruling Jubilee party was on its deathbed, Moses Kuria said the party is to blame for failures of President Uhuru Kenyatta’s administration.

“I would give the government (2107-now) a rating of 2-3/10. This is because in my opinion, Jubilee Party lost focus. The implosion of Jubilee Party is inevitable. It is now a question of when it will happen, not if,” he said.

Kuria also gave his views on the BBI Bill saying the proposed constitutional reforms do not need a referendum.

“There are good things about the BBI but most of the reforms do not require a referendum. But the owners of the BBI are trying to perpetuate power. That’s the main agenda of the BBI,” he said.

Towards the end of the interview, Kuria, in an attempt to prove his closeness to the Presidency, made a call to Uhuru which went unanswered.

“He must be attending to State business in Congo,” Kuria said.