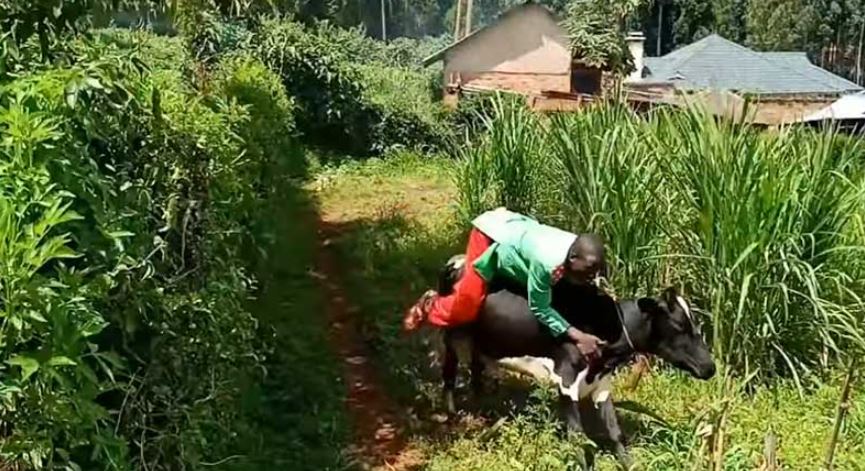 Unless you live under a rock, you’ve probably seen videos of a musician from Kisii pulling off bizarre stunts during his performances.

The clip captures Embarambamba running around a garden and jumping on a cow at some point.

Other clips show the famous musician climbing on a tent while another shows him lying in the mud while clad in a white suit.

While a section of netizens finds his videos entertaining, another section has launched a petition calling for Embarambamba to be barred from performing such stunts.

Nguzo Africa, a community development agency based in Narok, Kisii, and Bomet Counties, says the singer’s antics might prove harmful not only to himself but also to fans.

The petition is addressed to the CS Ministry of Health, Kenya Mental Health Board, Kenya Psychiatrists Association, Kenya Film Classification Board (KFCB), Kisii Council of Elders among other bodies.

“Nguzo Africa on behalf of concerned Kenyans hereby petition the above-mentioned institutions to urgently stop the Kisii artist “Embarambamba” whose official names are Chris Mosioma from performing peculiar stunts that may affect his safety, followers, and the environment,” the petition reads in part.

It adds: “We are concerned that despite the artist’s confessions that he gets overwhelmed with “Holy Spirit” when he performs, none of the concerned institutions has taken action to assess his state of mental health.”

Further, the petition claims Embarambamba is painting Kisii music in a bad light.

It urged Kenyans to sign the petition “For the dignity of the music industry in Kenya. Music is meant to entertain, educate and pass on good cultural values. Music was not meant to scare, embarrass, maim and destroy” and “To safeguard Kenya’s brand. With the increased use of the internet, an outsider may classify the artist’s music as Kenya’s image. At the local level – Kisii music may be classified with these peculiar stunts.”

Harmonize’s Ex-Wife Sarah Suing For Equal Share Of Wealth < Previous
MP’s Lover Sues For Sh200K Monthly Upkeep For Son Next >
Recommended stories you may like: