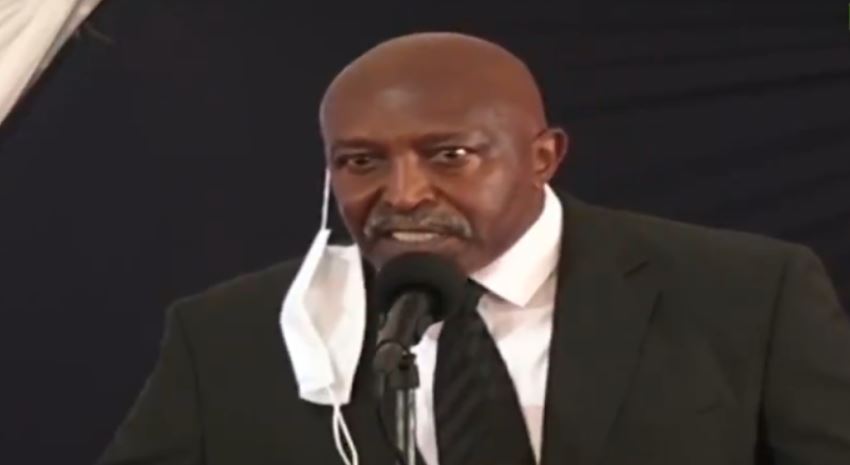 Kenneth Nyachae, son of the late Simeon Nyachae, left mourners in stitches on Monday when he recalled the day the former minister boxed him for locking car keys inside his brand new Mercedes Benz.

Speaking at Gusii stadium during Nyachae’s funeral ceremony, the Kenneth said the one-sided boxing match with his father happened one Christmas after they had left Kisii for their farm in Sotik.

“Dad had arranged for a Land Rover to come and take us to the farm. So he parked his new Mercedes on the roadside and told me to look after the car. ..The music was there with Kenny Rodgers playing,” he said.

Adding: “The car has a central lock key and he had mentioned that should I feel like I want to step out of the car, I should remove the key.”

Unfortunately, Kenneth Nyachae failed at the one job he had. “I stepped out to stretch but forgot the key. The car locked itself and dad and the rest of the family had gone into the farm.”

He narrated that his dad got wind of what had happened and came fuming.

“He was informed and when he was coming with the Land Rover, he did not wait for it to stop. He jumped out of it like the bodyguards belonging to the President and his deputy and came straight for me. I was in form four by then, which means I was a bit tall,” Kenneth said.

“As he came for me, I tried to look as helpless as possible. As he came nearer to me, the punches began and he was very skilled and that was a few weeks after Mohamed Ali had just been knocked down.”

As further punishment for leaving the keys inside the car, Kenneth was forced to ride in the Land Rover as his family rode in the new Benz.

“He carried me up and said I could not adhere to instructions. So dad said I was going to ride in the Land Rover with goats, driver and a bodyguard,” he narrated.

“…on our way, the driver and the bodyguards bought boiled maize at around Ndaragwa area. I was in the back of the Land Rover when they gave me the maize. As I was chewing it, I know the goat was wondering why I was eating the maize alone and yet we were comrades,” Kenneth added leaving mourners in fits of laughter.

President Uhuru Kenyatta and his deputy William Ruto also confirmed that Nyachae never shied away from using his fists.

‘Kenyans Are Already Overburdened!’ Atwoli Reprimands EPRA Over Increased Fuel Prices < Previous
All The Trending Memes and Tweets This Tuesday Next >
Recommended stories you may like: