“It Will Not Be Business As Usual,” Nurses Say Ahead Of Strike 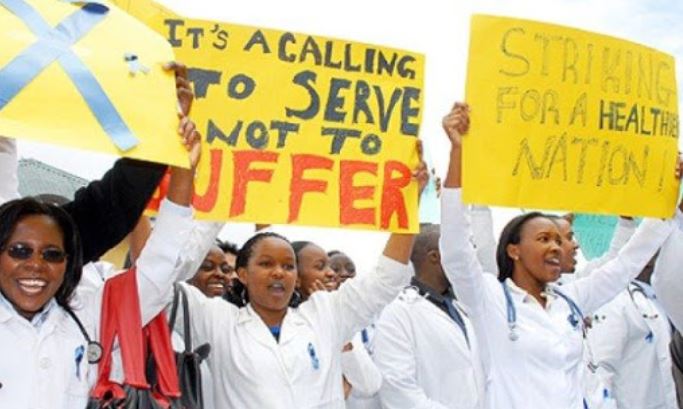 Nurses in Kenya have threatened to go on strike next week over poor working conditions and unpaid allowances.

Panyako noted that both essential and frontline workers are facing serious delays in the implementation of the presidential directive to pay risk allowances.

“From Monday it will not be business as usual in this country. You can’t work when you don’t have food, you have children in the house and you can’t pay your rent,” Panyako said.

According to the nurses, they are seriously demoralised over the lack of payments that also includes responsibility allowances and insurance covers.

Panyako also called for all health care workers especially in Western and Nyanza regions to be tested, saying these areas were supplied with substandard PPEs.

He also declared that nurses won’t go to work without N95 masks.

Mr Panyako also took issue with the lack of isolation facilities for infected health workers despite the government’s pledge to put them up.

“WHO has said that this virus is a work injury hazard hence treatment of all frontline health workers should be free,” added the SG.

County workers union Secretary-General Roba Duba added that workers are yet to receive their June and July salaries.

“There is a big crisis. We can no longer exercise any more resilience. Provision of quality PPEs is mandatory. Health care workers need physical protection because they are killed from and on their way to work,” Roba said.