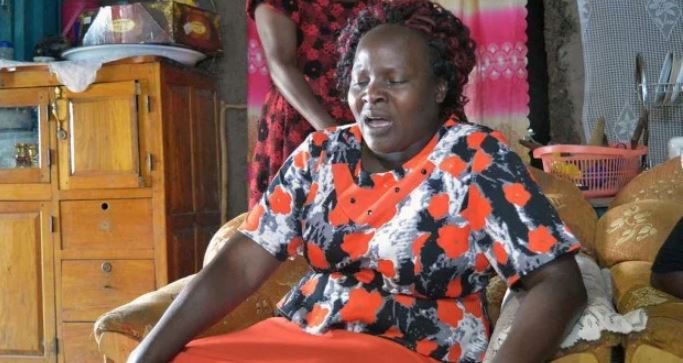 Melida Auma, the mother of slain Rongo University student Sharon Otieno, has pleaded with the County government of Migori to provide for her since the “breadwinner is no more.”

Speaking moments after arriving at her home from Nairobi on Monday, Ms. Auma said the Migori County Government should be pursued to provide some upkeep for Sharon’s young children.

“As a family, we have been rendered hopeless since our only provider, Sharon is no more. Migori County Government should intervene and provide for me the way Sharon has been doing. We are ready to accept any assistance from anywhere since Am left with Sharon’s Children and they need upkeep which was being provided by the deceased,” she was quoted.

Auma, who is a teacher by profession was in Nairobi where she has been attending some of the court sessions in the case involving suspected killers of her daughter.

She was the first to link Migori Governor Okoth Obado to her daughter’s death after revealing that they were in a romantic relationship.

“Sharon was in love with him and was even expecting his baby. There were even talks to give her county contracts,” she claimed.

When governor Obado issued a statement in connection with the murder, the family rejected his condolences.

Governor Obado along with his aides Michael Oyamo and Caspal Obiero are facing murder charges and will know their bail application fate on October 8th.

Terryanne Chebet: I’m Available as a Character Witness for Jacque Maribe < Previous
Bus Rapid Transport System to Decongest Nairobi Set for December Next >
Recommended stories you may like: