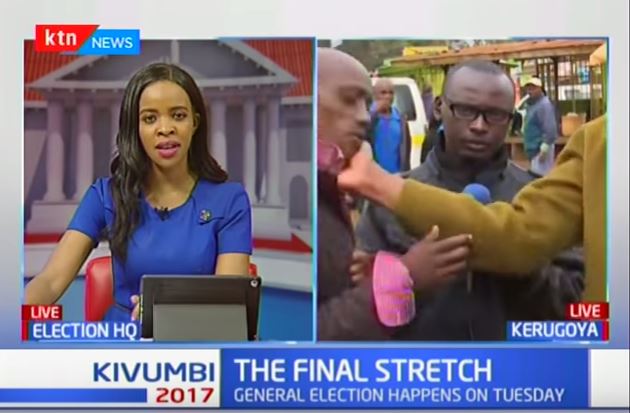 There are many instances that would warrant a slap and now we have a new one to add to the list. For those of us who like appearing on television, may this video serve as a warning on what not to do for those 5 seconds of fame.

A live report by KTN channel on Sunday was momentarily interrupted when a man rudely stepped into a reporter’s shot in Kerugoya.

KTN was covering IEBC’s final preparations ahead of the election when a man suddenly grabbed the reporter’s microphone.

Another man who had just been interview by the reporter, however, could not stand the ‘interrupter’s’ behavior and stepped in to contain the situation.

Watch the video below from minute 6:25.

Kamukunji Man Beaten and Stabbed for Romp with Married Woman Sues for Assault < Previous
Happy Ending for Everybody as Gladys Kamande’s Medical Fund is Split Next >
Recommended stories you may like: