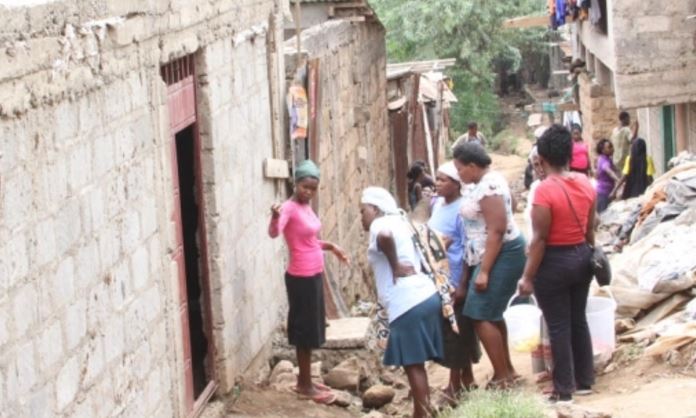 Residents of Ruaraka’s Laundry Slums, Nairobi were left in horror and shock Tuesday after a man killed his wife in cold blood over ugali as their two children watched.

The man, Patrick Adera, is said to have complained and picked up a quarrel with Viola Awuor Odhiambo, 23, after he was served with a small portion of ugali.

They then went to sleep but the victim chose to sleep with the children on a mattress on the floor.

When Adera called her to bed, they continued quarreling before things turned bloody.

The suspect then went outside saying he had gone to relieve himself only to return with a knife on his waist.

Viola had locked the door from inside and fallen asleep, but one of the children opened the door for Adera.

“When he entered the house, he started stabbing the wife. She called on one of the children to grab the knife from his father, but the knife fell down. When the child went to pick it up, the man kicked him. The child sustained an injury on his elbow,” said Lucy Wambui, a neighbour who was woken up by the children screaming.

“He took the knife, finished her and escaped,” she said.

“The children stepped out of the house at 3am (Tuesday) screaming that their mother had been stabbed with a knife by their father,” said Wambui as quoted by Standard.

She said that she accompanied the children back to the house and saw the man running away from the house. She found the woman lying on the floor with stab wounds on the face, neck and back. The knife was still on the bloodied bed.

She alerted the other neighbours and called in the police who came, photographed the scene and took the body to the mortuary.

KCSE Candidate Commits Suicide Inside Classroom in Kisumu < Previous
PHOTO – Babu Owino Flaunts First Class Honors Degree of Best Course in the World Next >
Recommended stories you may like: