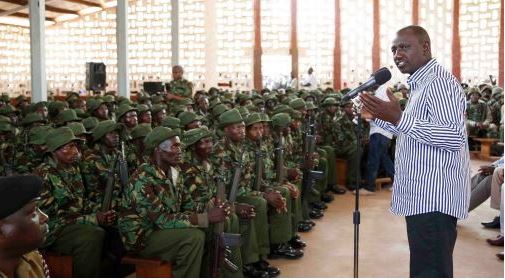 Alex Kipkiror, 30, and Rutto Kirop, 25, were allegedly killed at Sangach area by their colleagues who mistook them for bandits.

The two had left for home after they were relieved by their counterparts who would later shoot at them.

“The two had left for home but returned to pick a mobile phone they had forgotten at the post,” Marakwet East police boss Lemmy Njiru said.

“Their colleagues mistook them for bandits plotting to attack the guard post,” Njiru said on Wednesday.

One of the officers was shot in the stomach and died on the spot while the other one sustained gunshot wounds in the chest and died on arrival at the hospital.

The deceased were among the 255 police reservists commissioned by Deputy President William Ruto on February 27.

The bodies were taken to Iten county referral hospital for postmortem.

Six-Year-Old Girl with Serious Gunshot Injuries Turned Away at Mission Hospital for Lack of Sh20K < Previous
Sakaja Drops Nairobi Gubernatorial Ambition, Turns to Sonko’s Seat Next >
Recommended stories you may like: