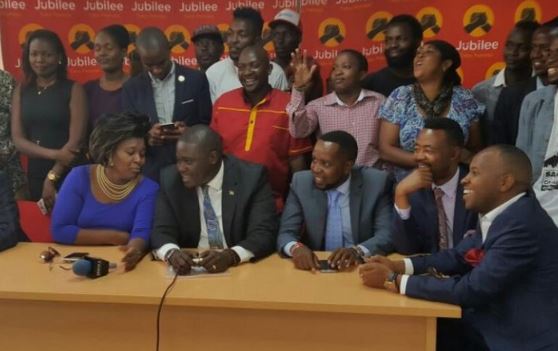 Nominated Member of Parliament Johnson Sakaja has dropped out of the Nairobi governor race and turned his parliamentary ambitions to the senate seat.

He will vie for Mike Sonko’s seat after presenting his nomination papers on Thursday.

Sakaja held a press conference after his papers were accepted at Jubilee Party’s headquarters in Pangani.

Kenneth said he will battle it out with his fierce opponents during the nominations and that his goal is to ensure Jubilee leads the county and is well represented at the assembly.

“Our goal as aspirants for Nairobi governor is to remove [Evans] Kidero. We must achieve this. Any sideshow is not for our taking,” he told journalists.

“We have seen Nairobi deteriorating daily… We will deal with Kidero conclusively on August 8 to end his atrocities.”

Two Police Reservists Mistaken for Cattle Rustlers Shot Dead by Colleagues < Previous
Akothee Exposes Deadbeat Baby Daddy ‘Who would Rather Spend his Money for S*x Holidays’ Next >
Recommended stories you may like: