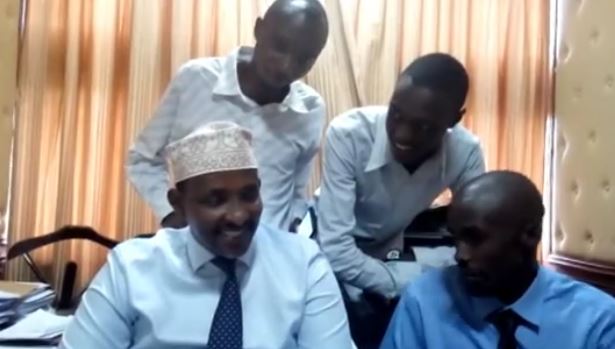 The Kalenjin based comedians who thrive on Kenyan politics have managed to incorporate yet another popular politician to one of their viral skits.

In the skit, propesa and Duale discuss several issues such as Education CS Matiang’i and the tough examination questions, in hilarious fashion.

During the ‘press briefing’, Propesa also ‘receives’ a call from probably his political icon William –  a key character in the group’s skits.

They end the briefing by urging Kenyans to register as voters with Duale outlining Jubilee’s plans beyond the August elections.

Eunice Njeri’s Ex-Hubby: My Heavenly Father Knows Exactly What Happened < Previous
65-Year-Old Man Dies Aboard Kenya Airways Flight Minutes Before Take Off Next >
Recommended stories you may like: