Kenya Airports Authority(KAA) has condemned the alleged harassment of Uber drivers at the Jomo Kenyatta International Airport, where they are reportedly not allowed to operate.

In a statement on Monday, KAA noted they had received complaints from members of the public.

This follows a social media outrage last week after an Uber taxi was clamped by KAA officials and its driver accused of conducting “illegal business” of picking customers from the airport. 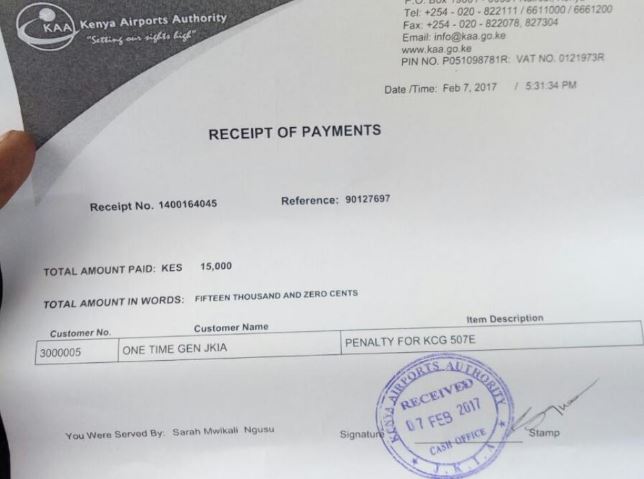 An Uber customer also accused KAA officers of corruption after he ordered an Uber taxi whose driver was arrested upon arrival at the airport and his vehicle clamped.

The same happened to the second vehicle he ordered.

“All this time I was recording this. When KAA officers saw me recording they asked me to delete the video and threatened to arrest me,” he said.

He said they released him thinking he had deleted the recording.

In its statement, the Airport Authority urged airport users to use the officially registered yellow taxis to avoid such incidents, until a solution is found.

“Kenya Airports Authority (KAA) has received concerns raised by the Public about alleged harassment of Uber drivers at Jomo Kenyatta International Airport.
We wish to reiterate that KAA does not in any way condone any form of harassment of our esteemed customers, clients, users and/or stakeholders at any of our airports and neither does the Authority nor our staff dictate the choice of transport for airport users.
We however encourage our customers and airport users to use the officially registered Airport Taxis (Yellow Airport Taxis) that can be found at various designated waiting and pick-up points within the airport.
Meanwhile, KAA is in discussions with other non airport registered taxi service providers to establish a commercial arrangement that is similar to the existing arrangement with the registered providers to officially allocate them space to wait and pick up their customers at our airports.
This will be announced to the travelling public in due course.”
Man in Gun Drama at Ridgeways Mall After Fight With Wife Arraigned in Court (VIDEO) < Previous
REVEALED: How Much Michael Olunga is Earning After Big Money Move to China Next >
Recommended stories you may like: