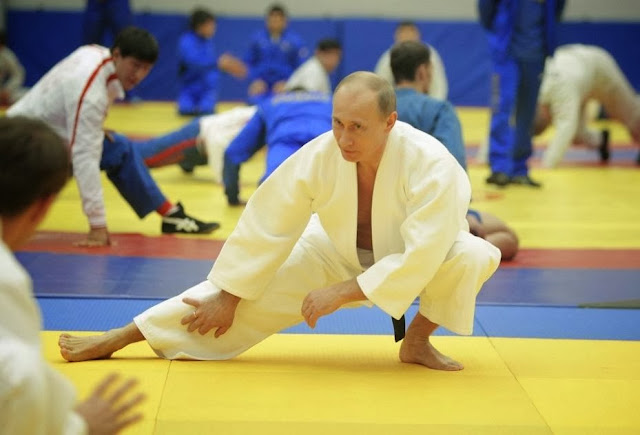 Russian president Vladimir Putin has been awarded the highest rank in taekwondo, the ninth Dan ranking, giving him honorary grandmaster status within the martial art.
Putin, 61, was on a visit to South Korea where he received a ninth-degree black belt from Choue Chung-won, the head of the World Taekwondo Federation.
This award means that Putin has now attained a higher rank than former US martial artist and actor Chuck Norris’ eight-degree black belt.
Putin was modest upon receiving the award, stating: “I don’t think I have earned such a high Dan.”
“Let’s call it our campaign to popularise this wonderful martial art,” he said. “Russia will do its best to contribute to its popularity at home.”
Only a select few have been awarded with the elite ‘Dan’ rank within the martial art. These include presidents of the US, Spain, Pakistan, Croatia, Honduras and Indonesia.
Putin’s official title within the martial art is now Honorary Grand Master or Sasung.
While the former KGB operative does not practice taekwondo, he holds a black belt in Judo and was awarded an eighth Dan in the martial art by the International Judo Federation last year.
In his youth, the Russian President was judo champion of his home town Leningrad, now St. Petersburg, and is reported to have released a martial arts DVD entitled ‘Let’s Learn Judo with Vladimir Putin’ in 2008.
Taekwondo is a Korean martial that combines self defense and combat techniques with exercise, with a global practising audience of 70 to 80 million
– IB Times
Miguna Miguna: I Do NOT Have Cancer < Previous
Mejja Now Ventures Into Comedy Next >
Recommended stories you may like: