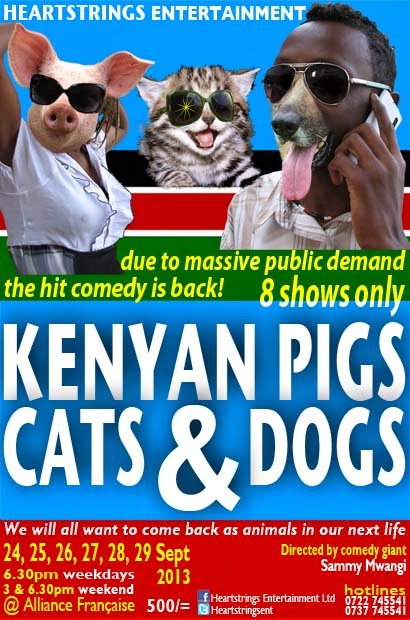 Kenyan Pigs, Cats and Dogs has returned due to public demand. The hilarious play by Heartstrings Entertainment will have 8 shows at the Alliance Française, from 24th to 29th September.
That means you only have three days to watch this master piece by Sammy Mwangi.

Basically, this is the plot.

We Kenyans have called animals all sorts of names. Pigs have been labeled dirty and greedy. Cats selfish and self-centered. Dogs have been branded immoral. This brutally and hilariously funny original comedy will prove to as all that humans have perfected all those ills, that the animals are now a class above the humans. So when we all die, we will most certainly choose to come back as animals.
This gut-crushing comedy will hilariously convince us that the best thing to come back when we all die, will be animals. Question is, which animal will you want to come back as?