A Look at Kenya’s Presidential Jet 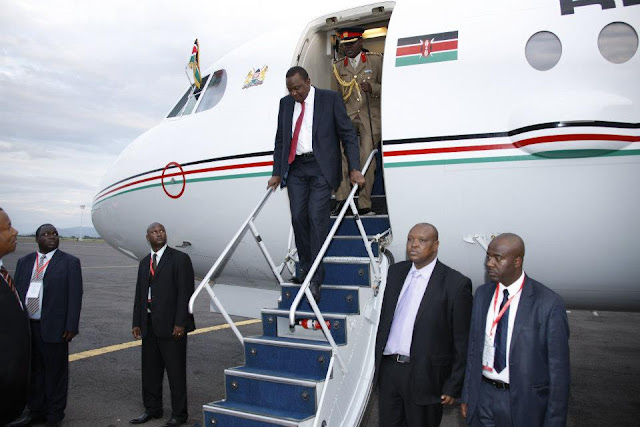 A day like today, 31 years ago, President Moi was almost overthrown as Commander in Chief. The result of that, as we all know, is that the president became authoritarian, and some politicians, including our former Prime Minister, were detained.

A lot has happened since, but it’s good to remember some of the most important moments in our history.
This article appearing on the blog theswiftmg.com talks about Kenya’s Áirforce One’ ie. the presidential jet.

I picked this particular plane as it is the official presidential jet. Pardon the bias for air force planes which will be over, in due course once we are done with all of them. They aren’t many…

The Fokker 70 is a twin-engine, medium-range, jet airliner produced by the Fokker Company of the Netherlands. Production started in 1992 and Kenya acquired its customized brand new one in 1995. I emphasize brand new one since. The Air Force has a reputation of getting second hand planes. This one was brand new.

It is a modern and fuel efficient aircraft powered by two Rolls – Royce Tay 620 turbofans placed at the back of the fuselage. They have around 13,849lbs of thrust. That is 61.6kN of thrust. It has a cruising speed of 845km/h, a range of 3410kms and a service ceiling of 11000ft. Its maximum take off weight is 41,730kgs an equivalent of 92,000lbs. The Fokker 70 ER is 30.91m long, has a wingspan of 28.08m a width of 3.30m and a height of 8.5m. It was fitted with modern state of the art telecommunication equipment which are on constant upgrading with changing times. Depending on the customers’ specifications, they came with different capacities. It has a crew of two pilots and depending on its purpose, the stewardship may vary in size. However for the presidential jet, its version which I would refer to as ordinary sits 70 passengers. The Kenya’s Air Force one has been customized for VIP transport and has a capacity of only 26. Part of its extra space in its cargo hold was customized and fitted with extra fuel tanks to increase its range. 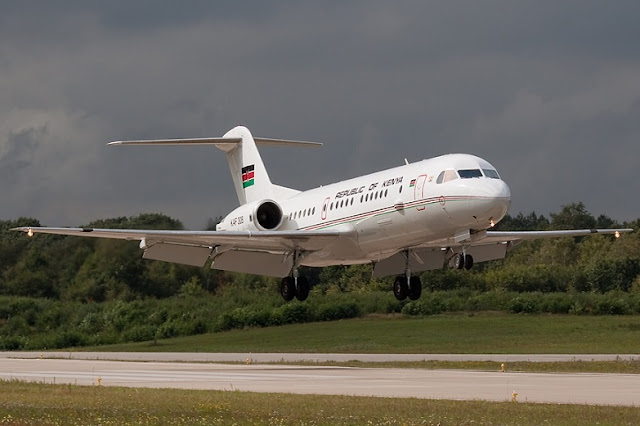 The jet being a flagship of the Air Force’s VIP squadron, was acquired in 1995, two years after its first flight on April 4 1993 and a year after certification was granted on October 14 1994. The first of its kind flew first on April 4 1993, at the company’s base at Woensdrecht in Southern Netherlands with a duration of 3 hours. It was later subjected to more flight hours which enabled it to be granted its certification.

It was selected because it stood out as the best concession that contented the specific requirements of the Kenya Air Force. The main contemplation that led to its prerequisite as final choice were range, cost, speed, cabin size, capacity, spares, training and future support. After its final assembly, the basic version Fokker 70 ER that Kenya bought was flown to Woensdretcht Completion center in Southwest Netherlands for Interior Fitting. The Kenya Air Force’s flight, technical and cabin crew are trained at Hoofddorp Training Centre, Netherlands to this day.

However the last Fokker 70 ER was delivered in 1997 after closure of the production line at its Fokker Schipol Factory following bankruptcy the previous year. Arrangements are being made to bring it back into production.

Video – How The President of Kenya is Guarded < Previous
AUDIO – August 1st 1982.. The Original Radio Message Announcing Coup on VOK Next >
Recommended stories you may like: