This Is Museveni’s Sh50 Million Armoured Limousine.. The One He Brought To Kasarani 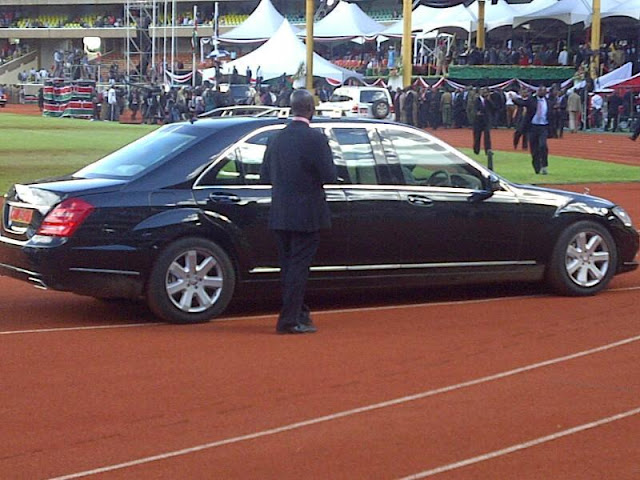 Uganda president was one of the speakers at Uhuru Kenyatta’s inauguration ceremony at Kasarani on Tuesday. In fact, he was the only foreign president who spoke at the ceremony.

In his speech, he thanked Kenyans for showing ICC the middle finger and voting in Uhuru and Ruto. He said that the court had been abused, and the west was now using it to impose leaders on Africans.

Apart from his controversial speech and his trademark hat, one thing stood out; his armoured car. Unlike the other presidents, Museveni brought along his car from Uganda and looking closely at it, it’s easy to know why. Though details are sketchy, a simple look at it will reveal heavy armour all over it.

The car is a S600 Pullman Guard armored limousine and the Ugandan president was first seen in it last year during the country’s 50th Independence Anniversary.
According to Chimp Reports, the car goes for not less than KSh 50 million, and was first manufactured in 2008.

It is marketed as coming with Mercedes ‘Highest Protection safety package’, which means that it has been engineered to resistance level B6/B7 against military-standard small-arms projectiles, hand grenades and other explosive charges.
Apparently, Museveni ordered the car in 2010, after his armoured Land Cruiser caught fire at a public function. He decided that the brand Toyota was not presidential. Reportedly, one or two people lost their job that day.

According to the manufacturer, the car can withstand small arms fire, grenade attacks as also fragments from explosions. The windows and windshields have a 60 mm polycarbonate coating which acts as a splinter shield. Its 90 liter fuel tank is self sealing and there is also a fire extinguisher on board just in case. An emergency air supply system will help in case of a biological attack.

The president can hold a meeting with anyone in any part of the world, inside his car. This is facilitated by hi-end communication devices. If he wants, he can even hold a face to face meeting with you. Literally face to face. How? the seat arrangement.
When everything goes wrong, there is a panic button which once triggered shuts all windows and doors from inside.
When everything goes completely wrong, the president can walk out and get into another similar car… Yes, they’re two.
© nairobiwire.com

Pictures Of Trucks Moving Kibaki’s Things From Statehouse < Previous
Jay Z Set To Buy Sh 260 Million Island Next >
Recommended stories you may like: