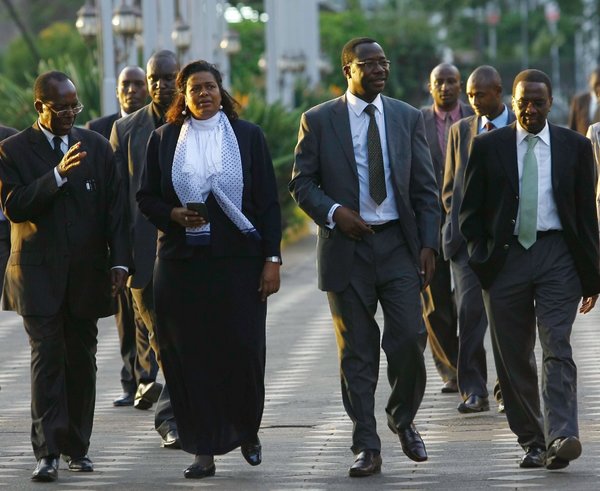 By MICHELA WRONG
LONDON — Although predictions are risky, here’s one I offer with absolute confidence: Traffic jams will return to Nairobi this week.
Gridlock all but evaporated during Kenya’s drawn-out election crisis — the free-flowing highways one symptom of the general malaise. But the announcement on Saturday by the Supreme Court confirming Uhuru Kenyatta’s election as president, and Raila Odinga’s grim-faced but graceful acceptance of defeat mean that ever-entrepreneurial Kenyans can finally get back to making money.

The stock market will surge, shop shutters will be rolled up, pavements will bustle, and Waiyaki Way, Uhuru Highway and the Mombasa and Ngong roads will once more witness a series of hair-raising, fume-belching, eye-watering contests involving man and machine.

Yet it won’t be business as usual. Something fundamental shifted with last month’s elections in both the way Kenyans view themselves and the way the outside world will view them, whether they like it or not.

Courts are by nature conservative, so Saturday’s announcement was only to be expected. But in confirming the election of a man indicted by the International Criminal Court for allegedly orchestrating the ethnic cleansing that followed Kenya’s 2007 polls, Chief Justice Willy Mutunga did more than solve a national wrangle over a ballot count. He secured Kenya’s place as a shining international symbol of impunity.

The I.C.C. case against Kenyatta now seems doomed. The chief prosecutor, Fatou Bensouda, has revealed that unprecedented levels of witness intimidation and bribery are undermining the cases brought against Kenyatta and fellow indictees, who include vice president-elect William Ruto. These tactics will only escalate, and it’s hard to see any Kenyan being brave — or foolhardy — enough now to take the witness stand against a head of state.

It will take a long time for any official to admit it, but the failure of the Kenyatta case may be the first chime of the death knell for the I.C.C., whose prosecutors already stood accused of anti-African bias and slapdash preparations long before the election in Kenya handed them a poisoned chalice.

The success with which Kenyatta and Ruto turned their I.C.C. indictments into electoral assets exposes how deep the scars of imperialism go. The anti-Western, anti-British vitriol that characterized exchanges in the press and on social media — most generated by Kenyans far too young to have experienced firsthand the Mau Mau rebellion of the 1950s — showed how grievances are efficiently relayed from one generation to another.
Jingoistic and cynical while campaigning, the Jubilee alliance of Kenyatta and Ruto is likely to be bullying while in power, with foreign diplomats whose respect it demands and constituents alike.

The immediate concern of ordinary Kenyans will be how the incoming government implements a new Constitution designed to devolve power and money to the counties. The document is seen as the key safeguard against a return to the “winner-takes-all” system of old. But historians warn that when Kenya tried devolved governance before, at independence in 1963, the experiment was swiftly sabotaged by Uhuru’s father, Jomo Kenyatta.

Civil-society campaigners, who were briefly shocked into silence by this weekend’s Supreme Court ruling, are bracing for a long campaign in the defense of the bill of rights. One issue they will have to tackle — in a country polarized as never before — is the political disengagement of people who queued for eight hours in the sun to vote, saw the tallying process grind to a halt, digested the damning details of the petitions citing election-law violations, only to be told this botched process was free and fair after all. Odinga has predicted a surge in voter apathy given that “what has happened here is a replica, a repeat of what happened five years ago.”

A Facebook page created over the weekend captured that bitterness. Entitled “I will NEVER VOTE in a Kenyan election,” it had attracted over 25,700 likes by midday Tuesday. “We are done with Independent Judiciary, Independent Electoral Commission, we are done,” reads one post on the page. “Let all Kenyans be done with VOTING, the most useless exercise in Kenya.”

Michela Wrong has covered Africa for nearly two decades, reporting for Reuters, the BBC and The Financial Times. She is the author of “It’s Our Turn to Eat: The Story of a Kenyan Whistleblower.”

Celtic Fans Write Song For Victor Wanyama < Previous
Uhuru Swearing-in Preparations At Kasarani – Photos Next >
Recommended stories you may like: