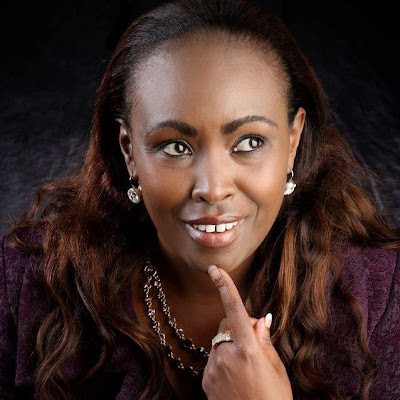 Caroline Mutoko has once again spoken of this person who impersonates her on Twitter. She has on several occasions denied owning this particular Twitter account, but Kenyans never care to listen, as was witnessed last week during the #SomeoneTellNigeria saga.

This tweet allegedly coming from her drew angry reactions from Kenyans, many who saw her as unpatriotic and arrogant. It was even used by Nigerians when firing back with the hash tag #SomeoneTellKenya.
It was also featured by several news websites reporting on the story, such as Aljazeera, and also given airtime on BBC world.

That particular account now looks deactivated, and a statement by Mutoko may have pushed the holder to that decision.

Aha! I’m told you are actually still speaking to that nutcase who impersonates me on twitter.

Kamal Kaur & most thinking beings can tell it’s not me just based on the poor idiot’s thought process.
Surely…me? Football? On which planet?

I can just imagine how engaged you must be twitting away @ some lunatic thinking it’s me. Now imagine for a moment the boner he has watching you chat with him non-stop, whereas in the real world he probably wouldn’t get a second glance from a chokora. Hahahahahahaaaaaaa!

I’ve told you enough times to un-follow that fool or just ignore him.
Hey, whatever turns you on. Just don’t whine to me about it.

Photo of Martha Karua’s Sisters < Previous
Tweets That Made Robert Alai Get Summoned By CID Next >
Recommended stories you may like: