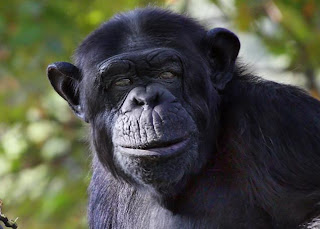 Gina is one naughty chimp.

Gina, a resident of the Seville Zoo in Spain, chose to solely watch adult entertainment channels when a television and remote control was placed in her enclosure.
Primatologist Pablo Herreros, writing in Spanish newspaper El Mundo, claimed he made the discovery some years ago on a tour of the nation’s chimpanzee enclosures.
During his research trip he conducted surveys on the behavior of the animals.

Herreros wrote, “What I could never imagine were the surprises prepared for me by a female of this species called Gina who inhabited Seville Zoo.”
“Due to the intense interior lives that these animals have, you have to enrich
their environment to stimulate them physically and psychologically,” Herreros wrote.  “These usually consist of artificial mounds, toys and other inventions that require them to be active and sharpen their wits. It is the equivalent of occupational therapy for humans.”
To enliven Gina’s nights, officials apparently decided to install a television, protected behind glass, and gave her a remote control so she could change the channels herself.