Theo Walcott To Remain At Arsenal After All 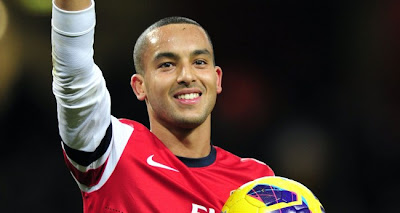 Theo Walcott looks set to sign a new contract at Arsenal after reportedly holding positive discussions with the club.

Walcott’s current deal with the Gunners expires at the end of the season, but the winger has twice turned down Arsenal’s £75,000-a-week offer following negotiations earlier in the season.
The situation had reached deadlock, but following the 23-year-old’s sensational form in the last few weeks – including a goal-laden spell as a striker – Arsenal have moved to up their offer.
In a fresh round of talks today, Arsene Wenger is said to have indicated to Walcott that he sees him as a centre forward in the long-term, and will boost his wages to £90,000-a-week as a sign of intent that the club want him to commit.

Walcott is said to have been happy with the offer, and all parties are expected to have further talks in the next few days, in a bid to thrash out the final details.
The news will come as a welcome relief to Arsenal, having lost a string of top stars in the final stages of their contracts, including Samir Nasri, Mathieu Flaimini, Gael Clichy and more recently, former skipper Robin van Persie.
But Walcott is poised to join a new list of British talents being secured by Wenger, with Alex Oxlade-Chamberlain, Jack Wilshere, Aaron Ramsey, Kieran Gibbs and Carl Jenkinson all securing their futures at the Emirates in the last month.
Metro

Newcastle Agrees To Sell Demba Ba To Chelsea < Previous
Top 10 Internet Dating Tips Next >
Recommended stories you may like: