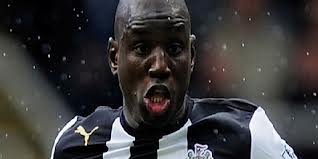 Newcastle United have given Demba Ba permission to open contract talks with Chelsea after the London club triggered the Senegal striker’s £7m release clause.
Ba, 27, has been removed from Newcastle’s squad for Wednesday’s game against Everton, and will instead travel for talks with the London club.
A Newcastle statement said: “Newcastle United can confirm that Chelsea have made an official offer for Demba Ba which has triggered the release clause in the player’s contract. The club has given the player permission to speak to Chelsea and therefore he will not be included in the squad for tonight’s game against Everton.”
Newcastle have repeatedly tried to renegotiate Ba’s contract in recent months without success as they tried to prevent a repeat of the speculation that surrounded the striker during the summer.
Ba’s initial three-year contract was complicated in its structure, with the club looking to protect themselves after he had earlier failed a medical at Stoke City because of a chronic knee condition, while the player kept his options open.
Earlier in the week Alan Pardew criticised Ba’s representatives for their part in the potential move to Chelsea.
The Newcastle manager said: “There are people out there who are fuelling this who are not actually involved. People are getting involved who perhaps have no right to be involved. I think Demba’s at a loss as to who some of the representatives are. They don’t represent him and I think he’s a bit upset about that.”
Ba has been a hit on Tyneside, scoring 16 goals last season and taking his tally for the current season to 13 with a double against Arsenal in Newcastle’s 7-3 defeat on Saturday.
Newcastle have been linked with moves for several possible replacements, including Marseille’s Loïc Rémy.
Guardian

Kim Kardashian Sex Tape Sales Soar After Pregnancy Announcement < Previous
Theo Walcott To Remain At Arsenal After All Next >
Recommended stories you may like: