Nairobi The 2nd Worst City To Live In Globally.. And How Kenyans Reacted To This ‘Shocking’ Ranking 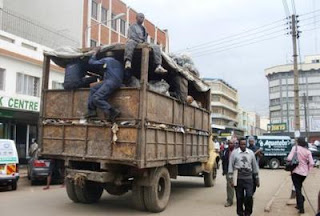 The more you think of it, Kenyans are peculiar than you think. An article published in July last year was yesterday trending and was the subject of a viral Twitter trend.
The report was written by the magazine Smart Planet, and based on particular criteria, Nairobi was declared the second worst place to live in. Worse than even Mogadishu.
The report looked at the following aspects.

Sprawl: using the ”estimated relation between the metropolitan region’s surface and its total population, the overall coherence of the metropolitan form and an estimate of the extent of low density urban fabric.”

Natural assets: using “Google Earth satellite imagery and information from Open Street Map to assign points to cities based on the natural features” and the number of protected areas around a city center.

Cultural assets: counting the number of UNESCO World Heritage Sites in the vicinity of the cities.

Connectivity: calculating how many cities can be reached by plane from a city and the average number of flights from that city.

Isolation: based on the number of large cities near a city.

Using that criteria, Smart Planet determined that the 10 best cities to live in are:

While the 10 worst cities to live in are:

Whoever dug up that article from the archives was quick to start the Twitter Trend #WhyNairobiWasRanked2nd. As is custom, Kenyans on Twitter like looking at the light side of things, and Monday was no exception. Below are some of the hilarious Tweets compiled by @nairobiwire.

#WhyNairobiWasRanked2nd high death rate, Nairobians don’t laugh, they ‘die’ when something is funny”

#whynairobiwasranked2nd Nairobi Djs to date have never found this “nduru”…

#WhyNairobiWasRanked2nd coz of—»» He chot his wife, chot his daughter then proceeded to choot himself.”

A foreign pastor coming to pray for women to get married, 2 yrs down the lane, 80% are husbandless!! #WhyNairobiWasRanked2nd

#WhyNairobiWasRanked2nd city clocks doesn’t have an alarm to wake up street children.

#WhyNairobiWasRanked2nd Because going to Eastleigh nowadays is like playing Minesweeper…

#WhyNairobiWasRanked2nd We have more Fake Police officers than Real ones

#WhyNairobiWasRanked2nd We walk through an alley wall written “USIKOJOE HAPA” and obey the Notice, we pee on the opposite wall.

Beats By Dr. Dre Maker And EA Sports To Make Gaming Headphones < Previous
15 Things That Should Remain In 2012 Next >
Recommended stories you may like: