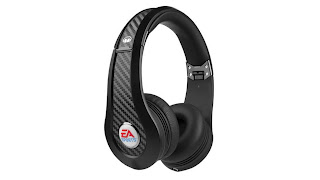 LAS VEGAS — Monster, the company that launched the super popular Beats by Dr. Dre headphone, announced on Monday it is getting into the gaming accessories market, and its first foray is a good one.
The company revealed at CES in Las Vegas a set of headphones in partnership with gaming developer EA Sports and its parent company Electronics Arts. The announcement was made with the help of Sugar Ray Leonard, Monster’s gaming advocate.
“This was a natural branding extension for us… to deliver great quality for our consumers,” said Chris Erb, VP of marketing for EA Sports.
The EA Sports MVP Carbon headphones ($269.95) — which will be available in black and white with an EA Sports logo on the sides — may be one of the many audio accessory companies marketing headphones to gamers these days, but the partnership with such a major gaming developer is rare.

The headphones incorporate Monster’s Gamebox mix amplifier and processor, which make it compatible with PCs, Xbox 360, PlayStation3, Wii and Wii U. It also features on-ear form factor and size, and foldable arms that make it easy to toss into a bag and go.
Gaming headphones are different than typical music-centric ones to help gamers differentiate between layers of sound, from background music to coins collected and ammunition fired.

The headphones will start shipping in February.
NFL player also welcomed Drew Brees to the stage as its new brand advocate for iSport, an in-ear headphone that doesn’t actually go in your ear.
Mashable