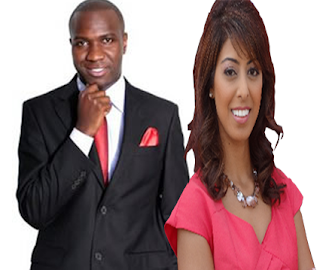 This is now getting out of hand. NTV’s news anchors James Smart and Smriti Vidyarthi are the latest journalist to resign from the now in trouble Nation Media Group. The sad part is they are all heading to KTN.
None of them has confirmed yet, but multiple sources claim that the two will officially defect any day now. Joining them will be Ferdinand Omondi, who is expected to tender his resignation before the end of the week. Unlike in Mohammed Ali’s case, who also recently bolted out of NTV for interference in his work, the reasons behind Smart and Smriti’s resignation are not clear. It is however believed that KTN has offered them better salary; much better. Ferdinand Omondi is reported to have been offered the Mombasa KTN bureau chief.
Nation Media Group and particularly NTV is facing what is probably its worst crisis ever. Over a period of one month, they have lost or have been rumoured to be in the process of losing some of their biggest names on TV. Mohammed Ali surprised everyone when he left the station a few months after joining it. John Allan Namu was also rumoured to be leaving NTV, but somehow changed his mind. Others who have left NTV for KTN in the past few weeks include Linda Ogutu and Joe Ageyo.
Should Smart and Smriti confirm their departure from Nation House, then NTV should get ready for a serious gap in news anchoring. They should also find a new host for #thetrend.. fast.
© nairobiwire.com
Tweets That Made Chris Brown Delete Account < Previous
Leaked Document Forces Anne Kiguta To Resign From KTN Next >
Recommended stories you may like: