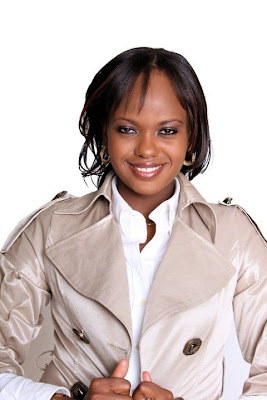 Tis the season of defections. After a hundred and one news reporters and anchors resigned from NTV in favour of their Mombasa Road based rival, one is reported to be going against the current. Jackal news is reporting that Anne Kiguta has resigned from KTN and is headed to NTV.

As Kiguta is arriving at the Nation Centre, she will probably be welcomed by the sight of James Smart and Smriti Vidyarthi carrying their cartons, heading where she’s coming from, Mombasa Road.
We have known there is a big problem in NTV’s management, which has been the root cause for most of the resignations, but a defection from KTN has caught many off guard.
It is however emerging that Kiguta’s reasons for leaving KTN are totally different from why others are defecting. A leaked document authored by the anchor, and published by the Jackal news on Tuesday shows clearly that the anchor would have henceforth found life at Standard Media Group difficult. She wrote her mind, and did not have very kind words for some of her colleagues.

Whether the letter had any correlation with her resignation is still a mystery, but its clear it catalyzed the process. Below is the letter.

Brief; Status of  Anchors:KTN has the best anchors in the market, but they cannot effectively compete with the rest. Why do I say the best? They are well rounded.  Any KTN anchor can more than just read a script. They are editors, reporters, good interviewers etc.  If there is breaking news roughly half of the anchors can handle it as well as do live events. KTN Anchors are overworked and exhausted. And worse still is the perception war- that anchoring of itself is not a job, you need to do more than that.

Top media houses the world over see anchoring a special job for highly skilled practitioners. It is enough to be an anchor, host news, do interviews, live events and represent the station. The latter is the biggest role, one we cannot take off like other staff. But here it is not enough. And because it is not enough- our anchors are at real risk of being a jack of all trades and master of none.

Both our flagship bulletins KTN Leo and KTN Prime are too crowded with anchors for the audience to identify with a team. Several anchors have been gifted position that clearly had nothing to do with their competencies. Four anchors, two male and two female are enough for the prime bulletins. It is crucial to reorganize the team and give the audience brands they can trust and identify with. In light of the new additions to the team, this must be done quickly to ensure the audience can identify with the anchors before the election.

It is my recommendation that we seize the opportunity provided by the festive season to introduce our new anchors to the audience as people will be at home watching. We should also do promos for the new look KTN Leo and KTN Prime teams.
We should also revise all our bulletins across the day to strengthen them. Traditionally our lost opportunities are on Sunrise, KTN Live at 1 and the 4pm Kiswahili bulletin.

Our in ability to offer competitive salaries and packages is a disadvantage. Anchors are the face of the station and are under constant judgment by the audience. If anchors cannot afford to look the part, you will lose the audience in the first ten seconds. Anchors wardrobe and make up allowance is low- 250k a year, when a decent suit costs 9 or 10k.  In the beginning of the year, the allowance for anchors was essentially revoked. They had to pay the entire amount.

The company can get into barters with stylists, fashion retailers and makeup artists to help meet this cost. Straight Up and the Mid Morning have this facility but prime time has been consistently denied. We must also appreciate Anchors need various concessions. They should not be expected to report with the frequency of reporters. KTN lost various reporters and never replaced them and put anchors in their place. This is wrong. In the so called ‘free time’ anchors should be reading wires, newspapers, articles, books, watch news channels, have discussions with producers and assignment editors on the bulletin. They cannot store up a wealth of knowledge on current affairs if they are running from one assignment to the next. They need time to look good. This is 60 percent of the entire presentation in this climate.  They need an entertainment allowance. Many times they have to socialize with clients and other stakeholders on behalf of the company.

All our anchors need to undergo intensive training for the elections. This should be done with a coach or analyst who can brief them on the key actors, issues, constituencies, parties etc. to watch for in the election. Anchors should also by now be given some idea of what specific role they will play in the election i.e studio anchor, panel interviews etc. This will help them prep. It is possible to even now develop content (graphics etc) that will be used in the event of dead air. These could be figures and issues in key constituencies, counties etc.

OTHER CHALLENGES: Production:  This remains the single biggest impediment to our delivery. KTN lost its top two directors (Linda and Yola) to the competition and they were never replaced. Kibisu is the only experienced idiod left. Winnie who was hired early this year is yet to realize her potential. All the other trainee directors were upgrade to senior directors inspite of their inability. Xavier is by far the weakest and yet he continues to direct Sunrise, 1pm and live event.s Chemjor is habitually disorganized and runs prime bulletins.  Confusion on the part of the director is to blame for many things including mic leaks, dead air and general disorganization of the bulletin and anchors looking dim. Unfortunately whenever this complaint has been raised, the response has been anchors are arrogant. This, because we demand professionalism.
The gallery remains one of the most in disciplined part of this business. VT operators, graphics and tx crew are busy watching football games, telle-novellas, citizen tv and facebooking when we are live on air. They are busy telling stories instead of listening to the director. They play catch up and we are caught pants down.
Two autocues in studio are failing and are yet to be replaced yet we have been complaining about them for more than a year. The answer is they are on the high seas. Anchors can barely see the autocue, worse still there is only one good operator Masete.  If you don’t have him on air, you’re doomed.

Management: This dates back to historical injustices. Anchors challenges are seen as the cries of spoilt brats, nothing urgent. This is the most disheartening and fatal problem of them all. When we fail to realize that television business, whatever it is, is show business then we’ve lost it. Audience reasons for watching tv have changed. The driver used to be news, now it is entertainment. Even news is entertainment. It is important to bear in mind the psychological needs of this peculiar people called anchors. They are part of the performance arts. They bear the harshest criticism directed to the station that touches on more than content. It gets personal. No one else takes the bullets for a station than its anchors. Management must realize aside from the hours, the emotional and psychological pressure anchors are under. They work later hours than anyone else. Even if your day ends at 10pm today, an anchors day doesn’t ever end. Wherever they are, they are the face of this business. Please give them the support they need and watch them flourish.

James Smart And Smriti Vidyarthi Resign From NTV To Join KTN < Previous
List of Kamba Celebs Making It Internationally.. (Hilarious) Next >
Recommended stories you may like: