Danson Mungatana To Be Evicted For Not Paying Sh 360,000 Rent

The Hard Times of Danson Mungatana. 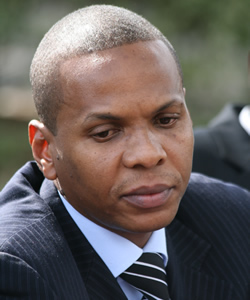 Garsen MP Danson Mungatana is having money issues again. After a series of cases involving issuance of bouncing cheques, Mungatana, who is also husband to anti-jigger ambassador, Cecilia Mwangi, is facing another embarrassing financial situation. He has not paid rent for his Mombasa law office for more than one year now.
Property managers Kiragu and Mwangi Limited wrote to Mungatana and Company Advocates demanding dues amounting to Sh366,444, which is unpaid rent for over a year. The letter was copied to Makini Auctioneers, who are expected to descend on the office soon, should the MP fail to clear the dues. The letter in part read, ““We note that your rent account now has an outstanding balance of Sh366,444. We wish to remind you again that under the terms of lease, rent is payable on the first day of the due quarter.”
The report was first made by Nation, on their website, and Mungatana was quick to issue a response, where he said that he had already cleared his dues
“Contrary to media reports published this afternoon, November 9, 2012, on the Daily Nation website; I do not have any rent arrears. No one has served me with a letter demanding any rent arrears. I do not run, administrate or sustain any law firm office in Mombasa” he said.
“It would be crucial for the Nation to note that I settled the bill of Shs 6 million a year ago and its unfair and against the rule of fair coverage in the Journalism Code of Ethics for them to keep referencing to a matter that was sorted and settled as if it is still fresh and an unaddressed” he added.
However, despite his response, it emerged that auctioneers have already been given authority to recover the amount, plus a Sh 38,000 service fee they are charging.
© nairobiwire.com
Inoorero University Non-Existent Law Degrees < Previous
Uhuru Kenyatta To Reward Gor Mahia Next >
Recommended stories you may like: