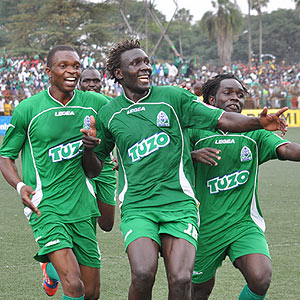 Gor Mahia sponsors TUZO, owned by TNA presidential aspirant Uhuru Kenyatta, has promised to reward K’Ogalo for its incredible performance this season. In a meeting held on Thursday at their Nyayo Stadium headquarters, the Gor Mahia officials and TUZO managers reconciled after a series of verbal attacks from both sides.
They said that the differences experienced between them had been sorted out, and they would now harmoniously work together to appreciate the players. “Our differences have been sorted and we are in good working relations. TUZO being our first major sponsor, we respect them. The sponsors have agreed to reward the team for their good performance this season and we appreciate the gesture.” Said George Bwana.
Gor Mahia is currently on top of the Tusker Premiere League table, with only 1 match to go. A win will bring them the cup, while a draw may not be enough, since the difference between them and Tusker, who are number two, is only one point. One point also separates them from AFC, who are ranked third.
Gor Mahia will be away at Thika United on Saturday.
© nairobiwire.com
Danson Mungatana To Be Evicted For Not Paying Sh 360,000 Rent < Previous
Come-We-Stay 6 Month Countdown: Facts And Figures Next >
Recommended stories you may like: