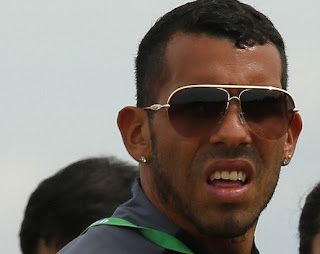 The Manchester City striker Carlos Tevez has been disqualified from driving less than a fortnight after his luxury car was removed from the road by police.
Tevez, 28, mimicked driving a vehicle after he scored twice in his team’s Premier League win at home to Aston Villa on 17 November.

Two days earlier his Porsche Panamera was impounded in Manchester as he could not produce a full UK driving licence. On Monday, Lancaster magistrates imposed an interim ban on him for a separate matter in which he failed to provide information when his car was clocked speeding in Morecambe.
It is understood his vehicle was caught breaking the speed limit in the town on 28 March when he played for City’s reserves against Morecambe Reserves.
His solicitor, Gwyn Lewis, told the court his client accepted he did not provide identification – which carries six penalty points – and that under the totting up procedure he was now liable for disqualification.
Mr Lewis said: “My instructions are though he was not the driver on that occasion I am not going to argue against a ban on grounds of exceptional hardship.”

He asked the magistrates to impose an interim disqualification and adjourn sentencing so that the “no licence case” from Manchester could be dealt with at the same time.
“He [Tevez] has been told that he will not be able to drive this morning,” added the solicitor.
The magistrates agreed and listed the matter in Lancaster for 20 December when the length of the suspension will be set.
The Argentinian did not attend Monday’s hearing.
His Porsche was seized under section 165 of the Road Traffic Act in a routine patrol near to the Britannia Airport Hotel on November 15. He was then summonsed for driving otherwise in accordance with a driving licence, said Greater Manchester Police.

Three years ago – when he was playing for City’s rivals Manchester United – his Bentley Continental GT Speed was impounded in similar circumstances.
The Bentley was removed by police near junction six of the M60 in February 2009 after it was found he did not have a full UK driving licence.
As an Argentinian driving licence holder, Tevez, from Prestbury, Cheshire, is permitted to drive in Britain for the first 12 months of his stay in the country but is then required to apply for a provisional licence and pass the UK driving theory and practical test.
The centre forward joined West Ham United in 2006 and then moved to Manchester United a season later. He signed for Manchester City in the summer of 2009.
By Guardian

Kenya’s Richest Man Appoints Son To Board < Previous
Methalis Made In Kenya.. (Hilarious) Next >
Recommended stories you may like: