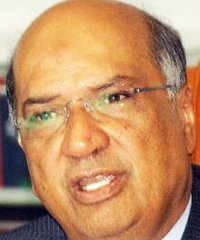 Kenya richest man according to Forbes, Naushad Merali, has appointed his son Sameer Merali to the board of tyre manufacturing firm Sameer Africa, in what has been interpreted as a possible succession at the family controlled company.
The younger Merali, from whom the company gets its name, has been appointed to replace the late Tom Owuor who passed on last month. Until his appointment, Sameer has been the an executive director in the company.
Naushid Merali was last week named Kenya’s richest man by Forbes Magazine. He was the only Kenyan appearing on the Forbes 40 richest Africans list, being placed at number 39, with a net worth of $410 million. He is the man behind Sameer Group of Companies; a conglomerate of multi billion shillings companies like Sasini Tea and Coffee ltd, Commercial Bank of Africa, Kenya Data Networks (KDN) among many others. He also owns Sameer Business Park; the beautiful piece of architecture along Mombasa Road.
© nairobiwire.com
KBC Programme Line Up From The Archives. < Previous
Carlos Tevez Banned From Driving Next >
Recommended stories you may like:

Altcoins that surprised the market in 2022