Raila Drove Himself To Ruto’s Meeting In A Pajama ??

A nation of Political Analysts 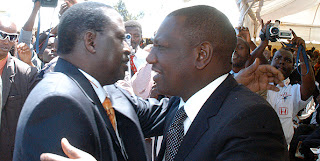 Raila’s and Ruto’s secret meeting on Tuesday night has been the main story this week. The two met at the home of businessman Joshua Kulei who is said to be leading efforts to re-unite the two. Both Raila and Ruto have not admitted that they indeed met, with Ruto actually denying it. The story that started as whether the two met quickly transformed into what was discussed.
It was reported that Raila offered Ruto the VP position and half the cabinet positions. Ruto is said to have refused to promise any support before the election, insisting that any deal had to be done after the first round of voting. He however promised to consider Raila’s offer.
Despite very little of the meeting in public domain, a weekly paper, truth newspaper, is reporting that Raila drove himself to the venue in a pajama. It further says that the prime minister was accompanied by only one of his bodyguards and his car had no flag. However, the paper fails to get even the basic of the sweet gossip right. They claim the venue was Ruto’s home when in fact it was Kulei’s home. The paper also adds that the deal is already a done deal, giving Ruto the VP position.
Despite all the falsehoods been spread concerning the meeting, it is clear that it caused a lot of political jitters and excitement. This week, discussions have solely been about it and almost everyone has received divine transformation into a political analyst, judging by the comments in public places and online. Nation carried out the story with the title ‘Secrets of Raila meeting with ex-ODM ally’ and it quickly became the most popular story. The over 250 comments were divided into three. Those advising Ruto not to join Raila and those welcoming Ruto to ODM formed the minority, with political analysis as the majority.
Below are some comments of people taking up the role of Mutahi Ngunyi, lifted from nation.co.ke

Mr Ruto should not only ponder and digest all the options on the table but also put into consideration the strained relationship between the various communities in the country. The power of democracy and its effects have to be felt and will be felt but at the same time political negotiations should not adopt a business like dimension. – Ndirangu S
It has always been termed dirty, but the game has never been murkier. Come election time there it will surely be some two stallions on the racecourse but the teams are far from defined, and believe me,the first round of balloting will provide the verdict… Watch this space for the ultimate thriller!!! – Mwandawida
Coalition govts have proved to be very ineffective and rife with corruption as each side steals and neither can point a finger.They should be avoided, if at all possible.These guys(RAO, WR, UK, MM,KM) have proved to be power hungry, tribal leaders and should be shunned.Again, should they win, Rao and WR will fall out again, with endless wrangles about unfulfilled MOU’s. – Wavidani
There was wind that there are some people in PNU who didn’t want Ruto on the cabinet at the coalition making. Word too came out the split was a game plan. If you knock anybody’s house and you were told PITA NDANI MLANGO UKO WAZI instead of KARIBU NDANI how would you take of each? Me and my house will support you but i can’t assure you of my clan sounds insulting. A man of RUTO’S caliber cannot swallow such. I admire Rutos qualities though atimes can be stubborn if you don’t understand him but is in the best bet for the interest of Kenyans if he joined RAO. – Chonjo
A Deputy President is a heart beat away from the presidency…….in case of force majeure… Here lies the irony is as long as WR’s is a running mate of RAO his case in the Hague can be sorted out…… That’s what we call letting the cat out of the bag. – Oldframe
I believe this arrangement is premised on the possibility of a run-off. Ruto understands the imminent desparation of the two top contenders and he wants to capitalise on this to unfairly negotiate. Raila should not accede to ludicrous demands that will put him in power but isolate his loyal constituency spanning Turkana, Western,Nyanza, Nairobi,Coast and North Eastern.That if Ruto supports Uhuru, he expects 50% and 60% from Raila is utterly nonesensical. I think Ruto knows where his heart is and should get his 50% from Uhuru instead of wasting time going to see Raila. How do you get more than the person who has beaten you with numbers?Every cow has its day in the butchery and if Raila’s will come in 2013, that of Ruto and company will follow soon after. – Richard Soke