Mrs Azeb Offered A Choice of 3 Villas, But She Loves The National Palace More. 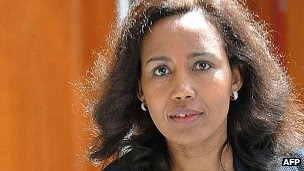 The widow of the late Ethiopia Prime Minister, Meles Zenawi, has refused to vacate Ethiopia’s State House, otherwise known as the National Palace. Mrs Azeb Mesfin, has ignored several government letters asking her to leave the palace, despite being given an option of three residential villas in Addis Ababa. She has even refused to have a look at them.
Meles Zenawi passed away officially on 20th August, though it is almost generally agreed that his death was kept secret for almost one month. Hailemariam Desalegn replaced him as the Prime Minister of Ethiopia, but until now, he has not had a chance to move into the palace. It has now been almost four weeks since the new leader was sworn in, but despite the numerous letters to Mrs Azeb, she has refused to vacate.
The new prime minister is said to be finding it very hard to undertake his duties, since he has to go to his office very early to beat the morning traffic and back home very late for the same reason. Together with his family, the new leader is currently living in a not so well guarded residential villa in the capital’s suburbs.
Mrs Azeb is commonly referred to as the ‘mother of corruption’ and is believed to have been the main reason behind Zenawi’s death secrecy and subsequent power struggle between some individuals.
© nairobiwire.com
Kenyans Ridicule Robert Alai’s Inspector General Candidature < Previous
Citizen TV Buys News Helicopter Next >
Recommended stories you may like: