Kenyans Do Not Want Julie Gichuru To Moderate Presidential Debate

“If you were to ask me, I’d nomimate Ahmednasir Abdullahi to moderate the debate” Jeff Koinange 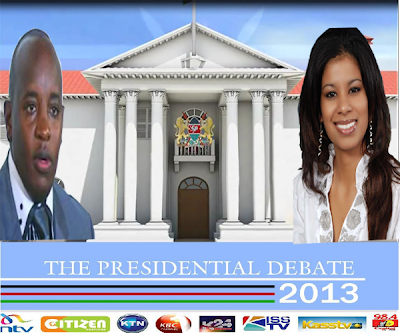 Yesterday, Kenyan media houses announced that there will be at least 3 presidential debates before next year’s general elections. The debates will bring together over 10 presidential candidates, and if the country goes for a re run, a fourth debate will be held for the two candidates in the race. The first of these will be held on November 26th, and will be aired by a total of 8 TV stations and 32 radio stations. The other two debates will be held on 14th January 2013 and  11the February 2013.
Reportedly, Citizen TV’s Julie Gichuru and NTV’s Linus Kaikai will moderate the live debates. This revelation did not go down well with many people who have varied reasons why the two should not be the moderators. Some reasons given as to why the two should not moderate are previous performance on high profile assignment and partisan accusations. Linus Kaikai is accused of having grossly underperformed when he got a chance to interview Uganda President Yoweri Museveni, while Julie Gichuru is said to have been intimidated by Uhuru’s presence on Sunday Live. It is also believed that Julie Gichuru had been promised the government spokesperson job by ODM in 2007, while Linus Kaikai had plans to contest a parliamentary seat on a PNU ticket the same year, before dropping those ambitions. The latter is also accused of being plain boring.
On social media, people were busy coming up with names of alternatives they saw as impartial and not easily intimidated.
Some of the names floated included: John Sibi Okumu, famous for his time at ‘Zain Africa Challenge‘,Kathleen Openda Mvati, Jeff Koinange, James Smart and Ahmednasir Abdullahi – Nairobi Law Monthly.
Those vocal against Julie Gichuru and Linus Kaikai included blogger Dennis Itumbi, Robert Alai and Chris Kirubi. Even Jeff Koinange had his preferred choice and it was not either of the two.

If you were to ask me, I’d nomimate Ahmednasir Abdullahi of The Nairobi Law Monthly to Moderate the #presidentialdebate2013. Perfect HOST!
— Jeff Koinange (@KoinangeJeff) October 10, 2012

#PresidentialDebateKE @juliegichuru cannot b a moderator in a debate and my friend Kaikai 2,they have been associated with partisan politics
— Dennis Itumbi (@OleItumbi) October 10, 2012

Meanwhile, James Smart did not have kind words for the people’s favourite John Sibi Okumu.

Subaru. Eish—►”@rgichira: John Sibi is not really a #Presidentialedabateke guy. This is not a game quiz or a school debate.”
— James Smart (@jamessmat) October 10, 2012

The following are tweets by several Kenyans giving their take on the moderator choice.

How about Miguna Miguna be the Moderator!- another tweep

Debates therefore we can have @CarolineMutoko first as moderator, @KoinangeJeff second and finally #JohnSibiOkumu.- @Mtandao_

John Sibi Okumu gets my vote! “- another tweep

Should be moderated by Mutahi Ngunyi, Eric Wainaina and PLO Lumumba  – another tweep

Beatrice Marshall of KTN would have done better

As in they’ve already been picked? Those two are lightweights. Poor choice. – another tweep

Linus Kaikai couldn’t get anything from #Machakos gubernatorial debate yet Jimmi Gathu got so much. How can he moderate #PresidentialDebateKE?

Linus cannot moderate the debate, we dnt want evry1 to sleep during the debate now do we??

My choice for #PresidentialDebateKE, moderator would be Uduak Amimo – Jacob

© nairobiwire.com
Manchester City’s Joe Hart Does Not Believe He’s The Best Goalkeeper In The World < Previous
‘Reformist’ Shebesh Under Attack For Defending MPs 10 Million Send off Next >
Recommended stories you may like: