“It’s nice when people say nice things about you, but things are easily said in football …” 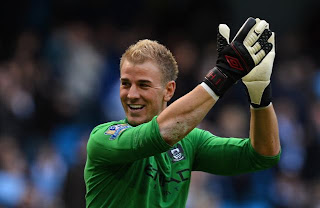 Joe Hart has played down talk of him being the best goalkeeper in the world, but insists he does want to be the man England can rely on.

The Manchester City No.1 was hailed as the top stopper on the planet by Wayne Rooney following his outstanding display against Borussia Dortmund in the Champions League last week.
But the former Shrewsbury star is simply focused on being the best he can be, and is not concerned about his place in the goalkeeping hierarchy.
He said: “It’s nice when people say nice things about you, but things are easily said in football and, especially in goal, you can be the worst in the world two days later if you’re on TV playing in a game and something bad happens.
“You have to remain level-headed. If you don’t, it’s a big slap when you do make a mistake and people say bad things about you. You can’t go too far one way or the other because it leaves you vulnerable.
“Every day I want to be the guy you can rely on. I want to be the best. I want to work hard on saving every shot. I’ve no silly targets about what I want to do or what I want to win, I just want to keep my love and passion for the game and hopefully good things will come.”
Talk Sport
Kenya’s Top 10 Radio Shows < Previous
Kenyans Do Not Want Julie Gichuru To Moderate Presidential Debate Next >
Recommended stories you may like: