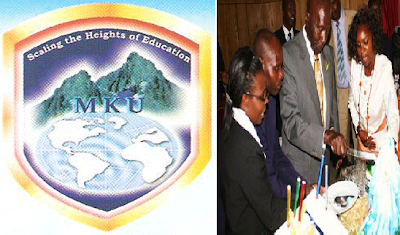 Mount Kenya University gave retired president Daniel Arap Moi a treat during his 88th birthday over the weekend. The Thika based University sponsored the ceremony held at Kabarak University on Saturday. They provided food for all guests who included among others all of the retired president’s children and grand children. There was also lots of traditional entertainment. The final gift from the University was the cake, which was big enough to feed everyone in attendance.
The University chairman, Simon Gicharu lauded Moi’s efforts in providing education to young people during and after his tenure.
Moi chose the occasion to give his advice on the now overdue police reforms. He said that the reforms should be delayed. He said that changing the institution hurriedly could result in unpreparedness during the next election, probably leading to more bloodshed.
“Changing the setup of the police now is not appropriate since the current formation as it is today understands the Kenyan security situation and knows the areas prone to violent flare-ups, I am sounding a very serious warning and I hope the government takes it equally seriously because Kenyans including me in my retirement need peace,” he said
© nairobiwire.com
Shame: Billionaire Awori Family Begging For Mpesa Funds To Offset Brother’s Funeral Expense < Previous
How The Media Helped ‘Campus Divas For Rich Men’ Gain 40,000 Likes In One Week Next >
Recommended stories you may like: