Disappointment For The ‘Campus Divas’ After Facebook Inc. Deletes Their Brothel. 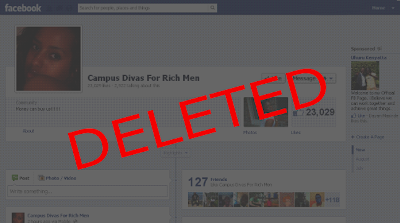 Facebook finally acted on the notorious Campus Divas For Rich Men, after it deleted the page towards the end of last week. From humble beginnings, the page had grown to become one of the most liked Facebook pages in Kenya, including its record 50,000 new likes in one week. This was mainly after it got lots of publicity on TV, newspapers and on blogs like this one.
Typing ‘Campus Divas For Rich Men’ on the Facebook search button will now give you tens of pages, many of which were created to counter the original page. Leading the pack is Anti – Campus Divas For Rich Men, which now boasts of over 12,000 likes. Others are:
Campus Divas NOT For Rich Men – 5000 likes
Campus Divas For Every Chokoraa – 4700 likes
Decent Campus Divas Against “Campus Divas Fir Rich Men” – 2800 likes
Campus Divas For Masufferer – 1600 likes
However, even with the deletion of the original page, another page bearing striking similarities including a similar name and profile photo is live. The second ‘Campus Divas For Rich Men’ however lacks the commanding number of likes its predecessor had. By the time of its deletion, the page had over 60,000 likes, while the new ‘Campus Divas..’ has slightly over 3000 likes.
Facebook is known to delete pages that go against its terms of service. There had been many complaints that the admin of Campus Divas.. was lifting pictures and profiles from Facebook users without their consent , and this led to many reports being forwarded to the Palo Alto based company against the page. Facebook has provided detailed Terms of Service, and the Below TOS is the possible cause of conflict between Facebook Inc and the page admin.

We respect other people’s rights, and expect you to do the same.