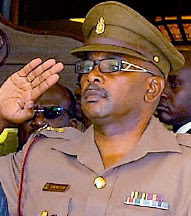 President Kibaki’s aide de camp, Geoffrey King’ang’i Muturi recently resigned to join Embu politics. King’ang’i, as he likes being referred to had been behind the head of state for the past 26 months, literally, having been called to take up the job in May 2010. Recently, he gave journalists an interview and he revealed previously unknown details about the life of an aide de camp, and the president himself. He was however careful not to pull a ‘Miguna’.
The process of picking the president’s aide de camp is very secretive and those shortlisted usually have no idea. Kibaki or the president of the day has the final say on who will stand behind him. This was the case with King’ang’i when Kibaki picked him from a shortlist provided by the Chief of General Staff. Every name on the list is accompanied by a detailed CV and a report from NSIS.
In May 2010, Col Muturi received a phone call with instructions to head to State House, for him to learn what it entailed being the president’s ADC. It hit him that he was replacing JL. Mrashui who, in few weeks would be leaving for further studies. King’ang’i’s family soon moved into State House, and after short training, he took up his new job.
His first big event was Madaraka Day at Nyayo stadium. King’ang’i told Nation that he saluted wrongly the whole day and had to undergo a one hour training the following day on how to do that salute.
Some of his most memorable moments are accompanying Kibaki to a soccer stadium in South Africa during the world cup, and scuffling with Gaddafi’s female bodyguards.
King’ang’i revealed details about Kibaki’s life that would have probably remained unknown had he not quit. For instance, he revealed that Kibaki never misses news; both Swahili and English. Everything else stops when that clock appears (He however did not say Kibaki’s favourite channel). He then makes a point of acting on any story he does not like, through the right protocol. Every morning, Kibaki is given a brief of what the papers contain, but he still insists on reading for himself.
King’ang’i describes Kibaki as an avid reader, who will not be passed by any document. “He is so much interested in economic and development matters. He can even spend hours reading documents on key projects like the Lamu Port project saying he needs to understand how it will work out,” he said.
He also revealed that Kibaki enjoys good gospel music, especially the Kikuyu hymns he is familiar with. He taps with his left foot rhythmically as the music plays.
Kibaki surprisingly has a mobile phone, which he uses to communicate with his family only. He either requests his ADC to make the call, or takes the phone and does it himself. Any other communication is done officially.
During the promulgation of the new constitution, King’ang’i saw an unusually happy Kibaki, in fact, he was the happiest he had ever seen him. He did not even object to wearing the gold coloured chain, signifying the highest honour in the land, despite his conservative nature.
On the other hand, Kibaki has had very low moments, especially when he loses close friends. According to the former ADC, Michuki’s death marked the lowest of Kibaki’s low moments. Njenga Karume’s death also hit him hard, and at such times he prefers been left alone.
Geoffrey King’ang’i is eyeing the Mbeere South parliamentary seat and he says that though Kibaki was surprised by his decision, he was very supportive. “I said ‘nitapambana’ and he told me, ‘No, no. You will succeed.”
© nairobiwire.com
Facebook Deletes Campus Divas For Rich Men < Previous
Uhuru Making Night Phone Calls To Raila Next >
Recommended stories you may like: