By Ken   /   Sunday, 12 Aug 2012 07:03PM   /   Leave a Comment
Tarrus Riley rocked Nairobi on Saturday but even before the event, there were allegations that the Jamaican artiste had his iPhone stolen. It was alleged that the singer was frantically looking for it since it contained very important information plus the unbacked up contacts. However, organizers said that no phone was stolen and the rumours were started by haters out to make sure the concert did not succeed. 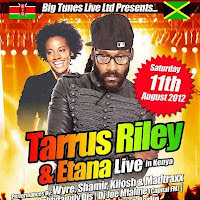 Meanwhile, Etana had earlier threatened that she would not be performing, following a disappointing experience with the promoter. On her twitter handle, she wrote, “So my representative had hell dealing with this Kenya promoter and I may not be able to perform. Though I’m here. Crazy.Wah dis mi come buck up pan inna Kenya. Ever feel like your hands tied? Women always fight extra hard”.
A few minutes later, she had a change of heart and decided not to let down her fans. “I won’t disappoint my fans though, come too far and been ready too long! Kenya weh yuh say!”
Phone theft by international artistes is not a new thing in Kenya.Years ago, Sean Paul’s phone was allegedly stolen and it was claimed there was a reward for its return, due to what it contained. Some time back, Shaggy was also alleged to have lost his phone during his concert in Nairobi.
© nairobiwire.com
Prezzo Shocked By News Of Saitoti’s Death < Previous
Fundraiser Organized For The 3 Kikuyu Musicians Accused Of Hate Speech Next >
Recommended stories you may like: