Fundraiser Organized For The 3 Kikuyu Musicians Accused Of Hate Speech

Politicians Expected To Contribute To The Kitty 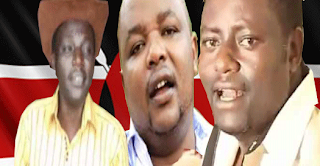 It is emerging that the three kikuyu musicians accused of hate speech are planning to hold a fundraising concert, in aid of their legal defense. The three; Muigai wa Njoroge, John DeMathew and Kamande wa Kioi, are reported to be organizing a concert to raise money that will facilitate their court hearings.The concert’s date is not confirmed but the venue is expected to be Carnivore’s Simba Saloon. It is believed that several Kikuyu leaders will attend to express their solidarity and contribute to the kitty.
The three artistes came into the lime light after translated excerpts of some of their songs spread on the internet prompting Mzalendo Kibunjia to act. They have since been charged of hate speech and are out on bail. If they are found guilty, they will be sentenced to a term not exceeding three years, a fine of Sh 1 million or both. They are also expected to incur a lot of money defending themselves in court.
© nairobiwire.com
Was Tarrus Riley’s iPhone Stolen? < Previous
Tanzanians Watched PCEA Women Die And Asked For Money To Help Next >
Recommended stories you may like: