Miguna Going To Kisumu To Promote His Book 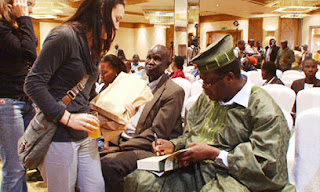 Miguna Miguna is back from what he described as a well deserved holiday and book promotion tour. The former adviser to the prime minister is however not ready to sit pretty and wait for his bank account to swell. From Wednesday this week, Miguna will embark on a nationwide tour to promote his book.

His tour will take him to several towns including Kisumu, where he surely does not expect a warm welcome.
Here is a statement sent to media houses by his handler.

Miguna Miguna kicks off his 47 county book tour to promote and popularize Peeling Back the Mask, his 614-page political memoirs, with a two week blitz which takes him to 11 counties across Kenya starting Wednesday August 22nd, 2012.

Miguna’s second week of the book tour will commence in Nyeri on Monday the 27th between 10 am and 12pm.

On the 28th of August the Quest for Justice Book Tour hits Murang’a for another morning engagement before moving on to Embu and Meru the next day. The Embu event happens in the morning while the one in Meru takes place in the afternoon of August 29th.

On Thursday, August 30, 2012 Miguna Miguna will be in Machakos in the morning. Twenty four hours later, Thika would be his next stop. The first leg of A Quest for Justice Book Tour wraps in Nairobi with book signings at three book stores on the morning of September 2nd 2012.

The exact venues will be announced over the next few days. Other dates in other counties will be communicated later.

Specific locations of these events will be announced later.

Copies of Peeling Back the Mask will be available for sale with the author on standby for autographing.