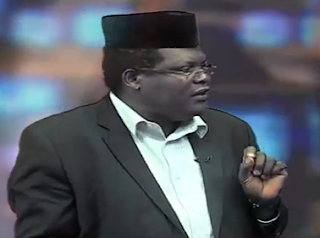 After returning from his ‘holiday’ from Canada, Miguna Miguna is out to keep the Peeling back the mask fire burning. Shortly after his return, the former adviser to the prime minister was a guest on NTV’s The Trend, hosted by James Smart and he showed no hint of a reduced ego.

Taken to task about articles by some columnists criticizing him,  Miguna did not mince his words on why they should all be ignored. Veteran columnist Phillip Ochieng was on the receiving end as Miguna claimed that he had no credentials to criticize him since he was given a free air ticket by Tom Mboya to go study abroad, but came back with no degree. However, the worst attacks were spared for Sunday Nation columnist Makau Mutua. The university dean wrote a column where he urged all to disregard Miguna’s book, calling it a gossipy political script.
Miguna said that Makau Mutua has never been qualified to critic anything. He said that unlike him, Makau Mutua knows next to nothing about political science and theory. In one of his catchy quotes of the evening, Miguna referred to the columnist as a robotic intellectual, who regurgitates what he reads without synthesizing. He added that the dean has never written a single article about issues but always deal with personality. The author was finally not shy to add that Makau Mutua is only jealous and envious because he has not written any memoir of his own.
Miguna was still visibly angry with Raila, who he claims has no credentials to be president. In what may bring Miguna’s ‘reform’ credentials to question, he said that he will work with anyone as long as bottom line was to prevent Raila from ascending to the presidency. He added that he was sure that the PM would not make it to state house but if he did, he would not stop criticizing him. He said that he does not fear power and that’s not in his DNA. He was particularly concerned that the prime minister did not come out to condemn the burning of his effigy, which he said was the highest level of intolerance.
Asked whether he has recorded a statement with the police following his claims that he has very incriminating evidence that can lock up many of our leaders at the Hague. Miguna said that he was not obliged to record a statement here since the cases are being tried at the Hague and not in Nairobi. He however, refused to reveal whether he had given any information to ICC. He said that Kenyans will find out when the witnesses are called on the stand.
During the call in session, one caller told the author to come clean on allegations that he has a rape case in Canada. Miguna stated categorically that has never been sued for rape or any other sexual harassment. To support his answer, he said that he has a very good relationship with the Canadian government to the extent that its ambassador to Kenya graced his book launch.
In conclusion, Miguna was asked whether he will be seeking any political office. Despite his refusal to discuss the matter, he gave the strongest indication yet that he will in fact be on the ballot. He said he will reveal more in due time.
Key points from Friday Night’s interview:
I may or may not have given ICC incriminating evidence.
I have never been sued for rape
I will work with those out to stop Raila from the presidency
Makau Mutua is a robotic intellectual
I do not fear power
While in Canada, I was earning more than Raila makes.
I will be joining politics
© nairobiwire.com
Hilarious Social Media Round Up This Week < Previous
Miguna Going To Kisumu To Promote His Book Next >
Recommended stories you may like: