Her Viral Video got more YouTube views than all the others combined. 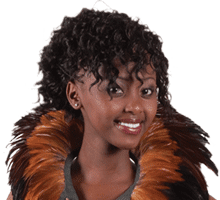 Burundi’s Tusker Project Fame 5 representative, Samantha was the surprise evictee on Saturday night. She was one of the contestants considered a favourite for a top three spot. She was a hot topic on social media and right from the auditions, there was a #Team Samantha on twitter. When the contestants made videos of themselves doing crazy stuff, hers was the most viewed on YouTube with over 24,000 views (more than all the others combined).
This was her first time on probation and she did not appeal to either the public, judges or the faculty. The shock on everyone’s face betrayed their assumption that Samantha was invincible. For the umpteenth time, the public voted for Doreen. When the contestants voted, there was a tie between Samantha and Steve. That gave the judges the opportunity to break the tie. After short consultation, they saved Steve.
It was then time for Helen Mtawali to announce who the faculty would be saving. Nancy it was. The shock on everyone’s face including Samantha was evident. She however maintained her composure and went ahead and performed her last.
This week, you who has been voting for Doreen will have to look for a replacement because, surprise surprise, she is not on probation.
© nairobiwire.com
50 Incredibly Hilarious Quotes. (HUMOUR) < Previous
Is Mourihno ‘Seeing’ A Kenyan Girl? Next >
Recommended stories you may like: